Welcome to the Hautes-Alpes! It’s been almost two weeks since we arrived in the pretty little town of Briançon. We came to the region to try out a brand new coliving that has just opened its doors in the heart of the Vauban city. (the cloud-citadel Coliving). I promise, we’ll tell you more about this place very soon and we’ll most likely write about the coliving in the coming weeks. But before that, we wanted to share with you our favorite hike of last week: the Clarée valley with snowshoes from Névache. 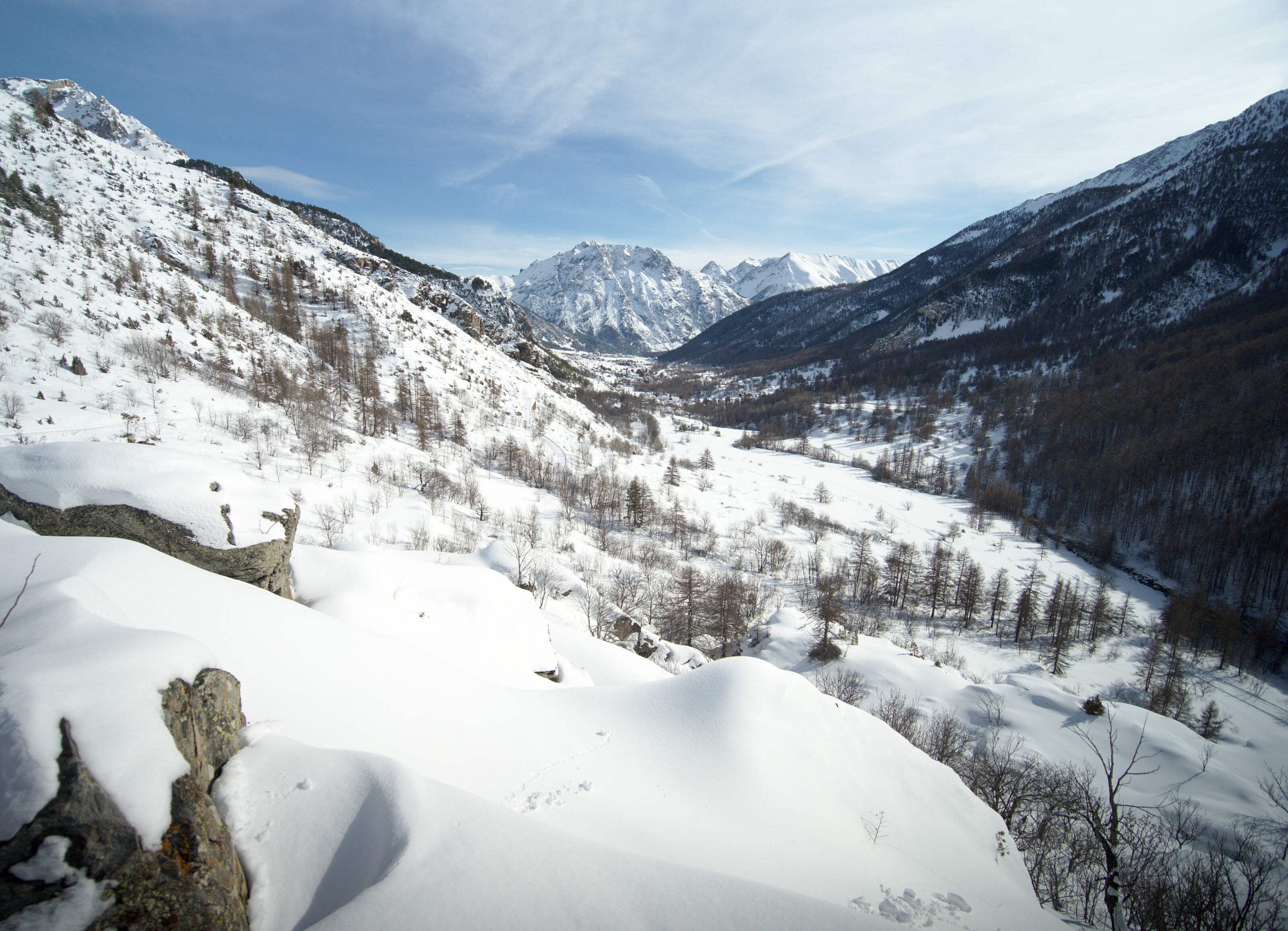 At the beginning of winter we decided to buy a pair of snowshoes each and so it was only natural that we took them with us to Briançon. This hike will have been their “baptism” (understand our first hike with them) and I think we started off quite well 😉 OK! Are you ready to discover more about a beautiful little French valley?

The Clarée Valley: like an impression to be at the end of the world

Can you see where the Hautes-Alpes are? Yes? Nice! (for those who don’t visualize it is the extreme east of France at the same level as Bordeaux, but on the other side) 😉 Can you see where Briançon is? A small town of 12’000 inhabitants nested between the Ecrins national park and the Queryas regional natural park… Well the Clarée valley is the end of the end, the last valley before crossing the Italian border, just before the small resort of Montgenèvre. This valley is especially known to be a small jewel of pure nature… With its larch forests and its preserved hamlets it is a real gem for nature lovers. It’s not hard to imagine how sublime this place must be in autumn when all the larch trees turn orange, but we have to admit that in winter it’s not too bad either. 🙂

Because of the relief of the valley there are not really options to install lifts (ok… there are 2 ski lifts but it’s really anecdotal). If you want our opinion it is precisely this point which makes all the charm of the place. In winter, the landscapes are immaculate white and everything seems to be frozen in a thick layer of powder snow!

The adorable village of Névache, starting point of the walk

To start this hike we had spotted a parking lot in front of the tourist office of Névache. In fact Névache is not the name of the village but that of the commune as a whole (barely 350 inhabitants for the whole commune). By car you have to go to the very end of the road, at the level of the hamlet of Ville-Haute.

In winter, the road stops here and the rest of the valley can only be explored on foot, snowshoes, cross-country skis or ski touring.

Once the car was dropped off at the car park, our hiking trail left “officially” by the right to pass the Saint-Antonin chapel and go around the hamlet. But somehow we were irremediably attracted by the magnificent traditional houses and that we opted for a (small) change of itinerary to cross the hamlet?

Special mention for the bakery of Névache 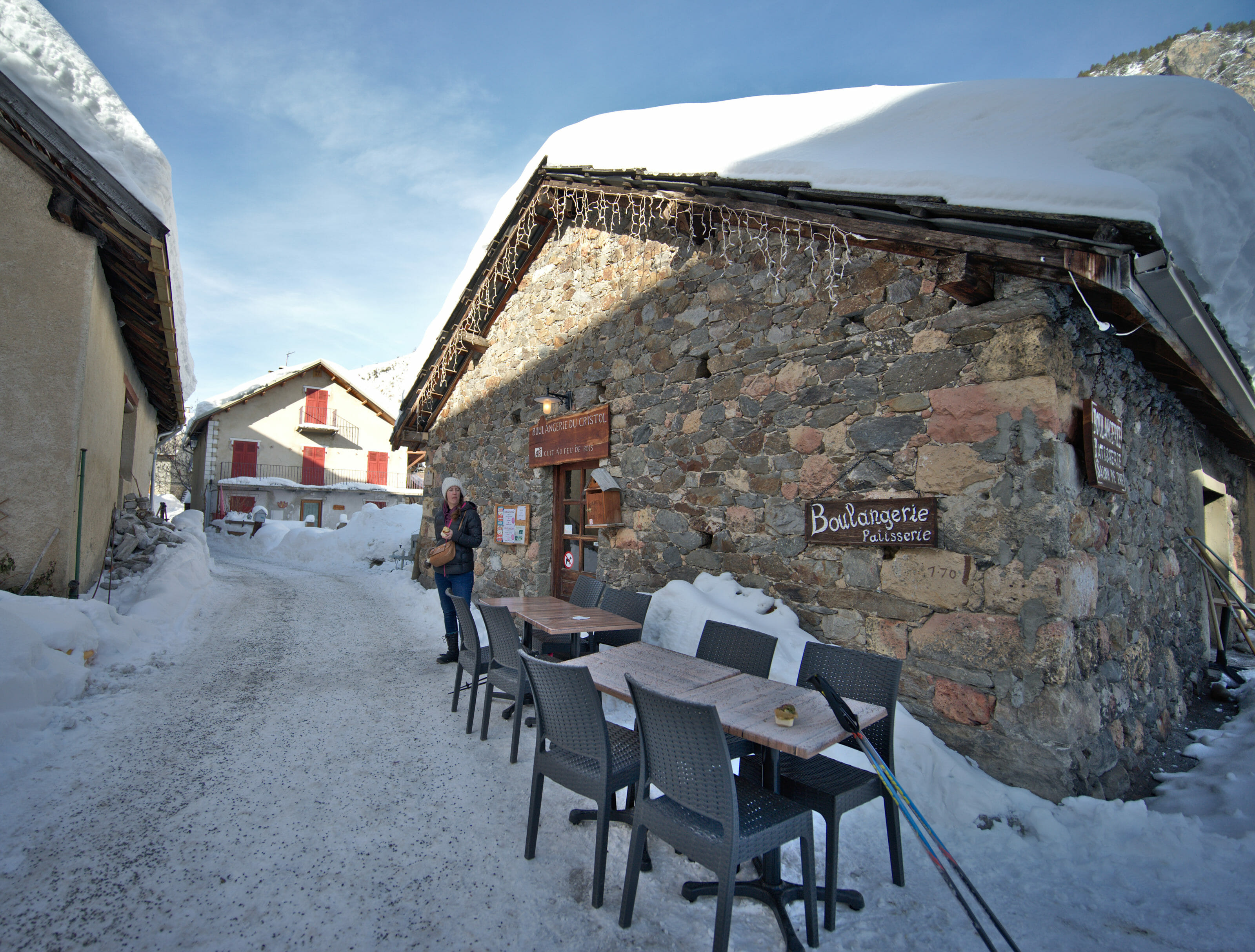 It’s not our habit to talk about food on the blog, but we’ll make an exception here! As we were about to start our hike we passed the small bakery in the village. We were immediately attracted by the pretty building and suddenly we were a little hungry. 😉 This bakery is really a little gem… Everything is organic and homemade. All the breads are baked in an old wood oven that is more than 300 years old. Of course we didn’t taste everything, but believe us, everything looked delicious. We opted for mini-cakes with olives and herbs and it was simply amazing. Anyway, if you come this way, we suggest you drop by for a visit.

Our snowshoeing itinerary in the Clarée Valley 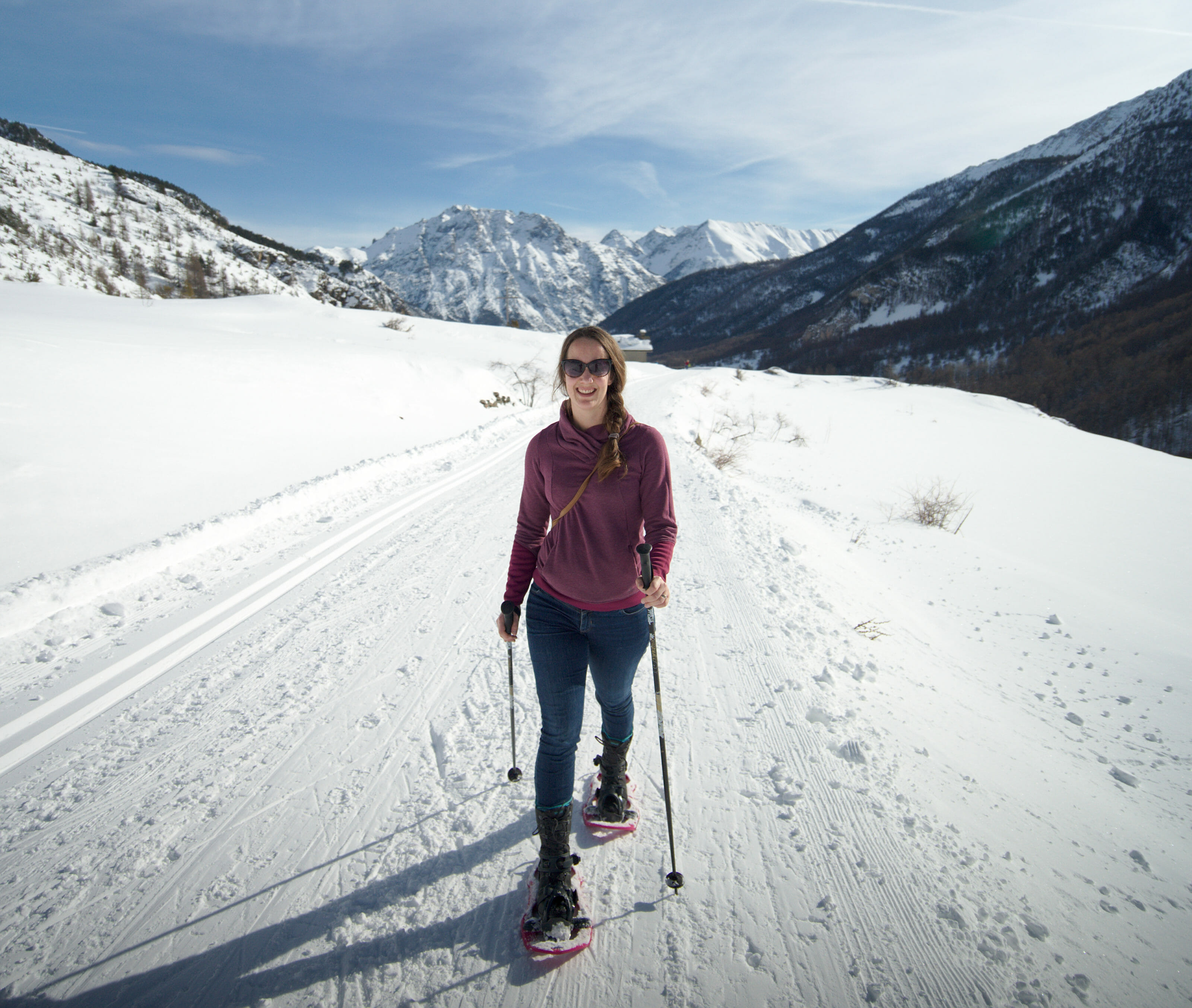 Below you will find a description of our route between Névache and the Fontcouverte waterfall. We chose to make a loop by taking the summer road on the outward journey and the path that runs along the right bank of the Clarée on the return. The summer road can easily be done on foot in winter (it’s groomed) but it is recommended to have snowshoes for the path along the river. 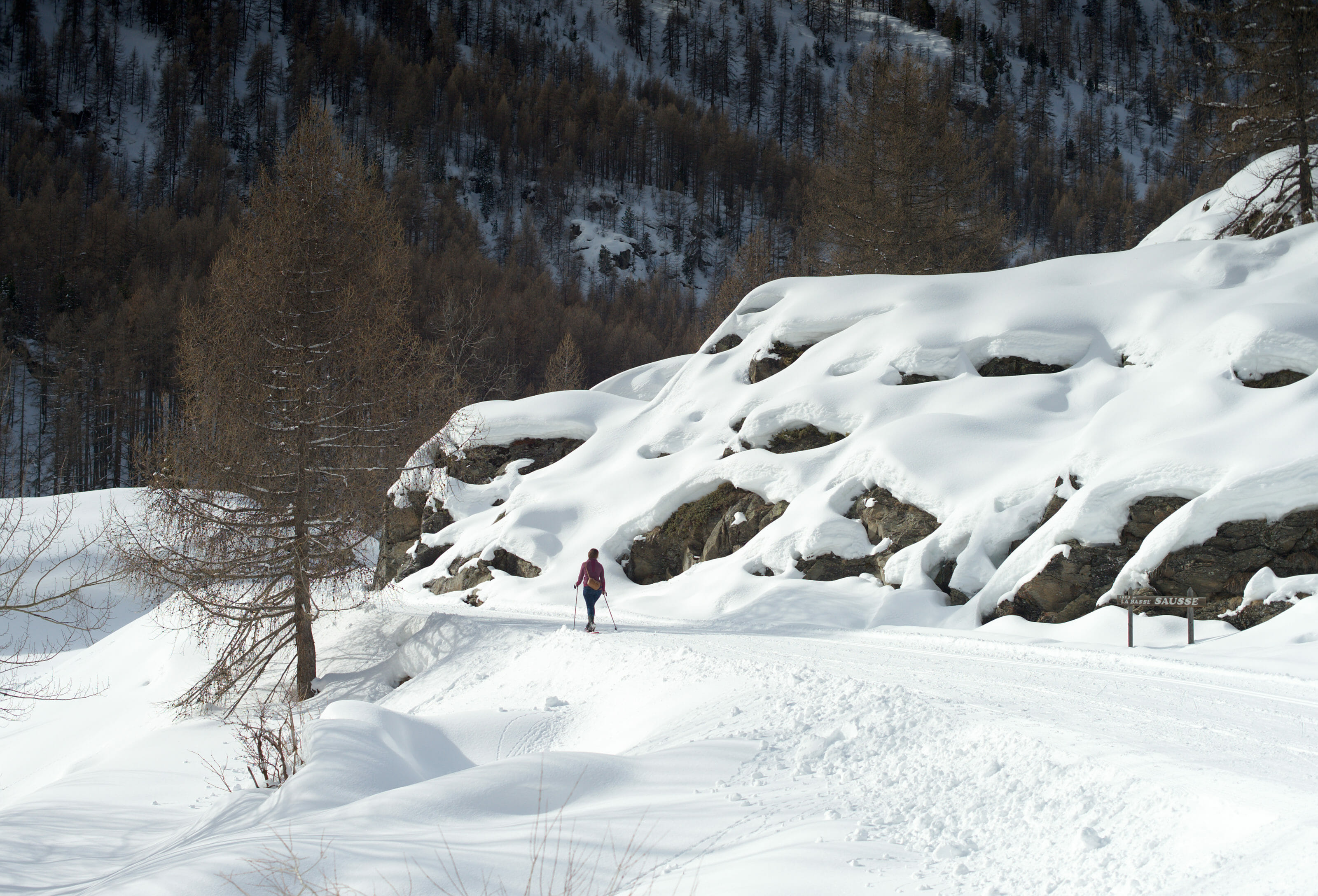 Leaving the hamlet of Ville-Haute from the top, you reach the summer road (groomed in winter) and start to follow it. During the winter months there is no traffic on this “road”, only hikers and skiers share it. Between the hamlet and the first chapel which overlooks the valley there is a little less than 2km to cover (and a little less than 200m of positive difference in altitude to climb). The small chapel is the ideal place for a first short break and especially the first very beautiful viewpoint over the valley below.

The Haute Vallée de la Clarée and its hamlets 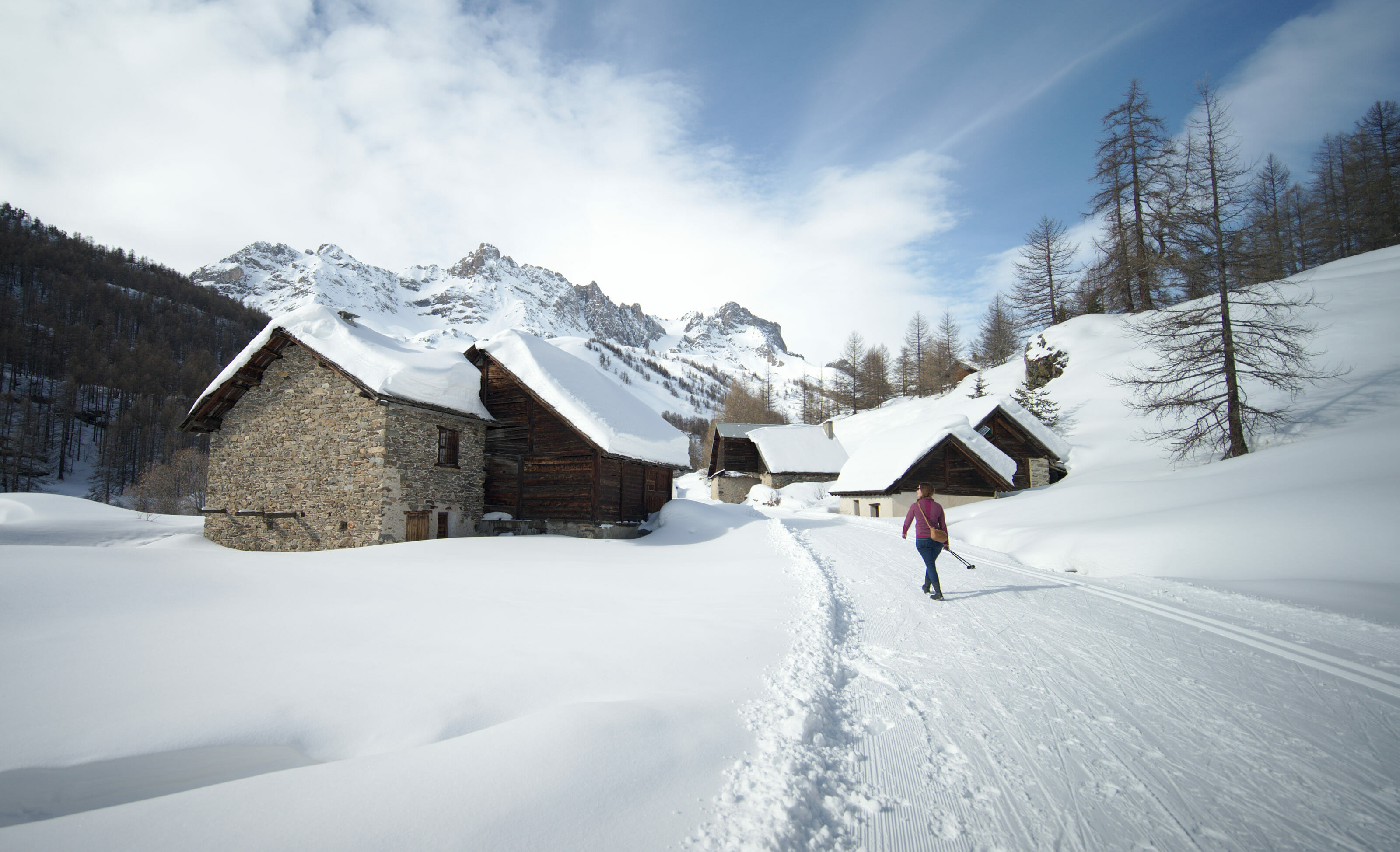 From the chapel the path becomes a little flatter and we continue to walk along the summer road. The scenery is still as beautiful as ever, but above all we pass many small hamlets, each one more beautiful than the next. The chalets that are here are mainly summer chalets and during the winter months they are as frozen in the snow (with thick layers of powder on the roofs).

Benoit and I have always liked the chalets, the wood gives an extra thing to these constructions and all we want to do is go inside to light a good fire and enjoy the view. But hey, we’ll stop dreaming, no buying a chalet on the agenda for us (but one day maybe). 😉

Our loop had a very precise objective: the Auberge de la Fruitière! Admittedly, we hadn’t made any special plans beforehand and we didn’t really expect it to be open in the middle of the week (adding the fact that we were there outside of the official holiday season) and in the middle of winter. It was the nice surprise of the day to arrive there and to see that it was possible to have a drink in the sun on the terrace or to eat a little something. 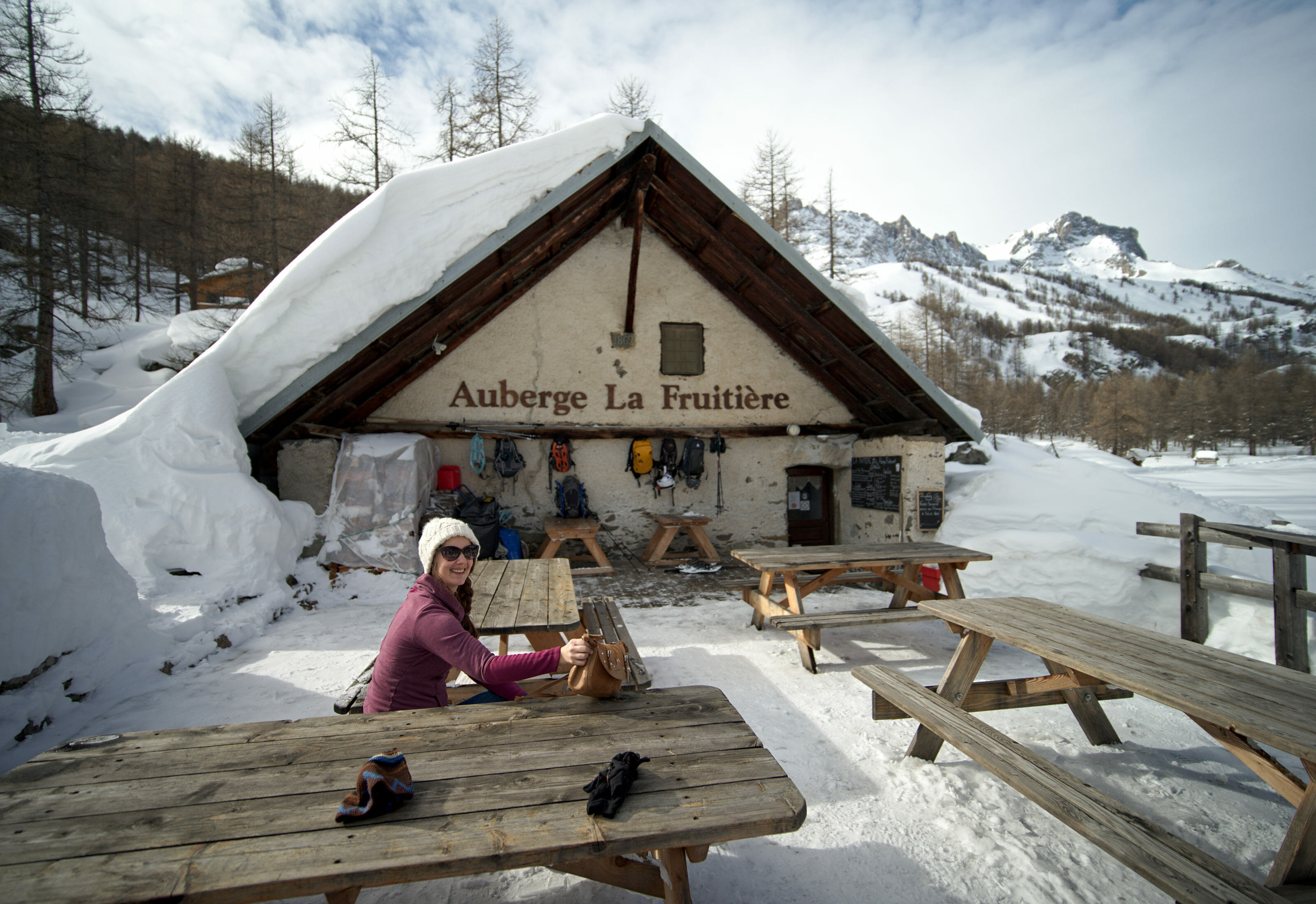 Still full with our cakes from the bakery, we skipped the fondue (even if we hesitated furiously, we admit it) and simply took a good hot chocolate in the sun. At the sight of the dishes we saw passing by we advise you to arrive with an empty stomach (unlike us ;)). Apparently their blueberry tarts are the best in the universe (at least according to some other hikers we met that day). #WhatElse

Note to hikers: The restaurant is open 7 days a week from mid-June to mid-September, during the All Saints’ Day holiday and from mid-December to mid-April.

Note: From the auberge we then decided to go back, but it is also possible to continue in the direction of the Laval hut which is open in winter. More information on their website.

After our short break at the auberge we took the small path that goes just in front of the terrace along the right bank of the Clarée. After not even 200m we arrive already at the height of the Fontcouverte waterfall. It is easy to imagine that this waterfall is very beautiful in all seasons, but believe me, winter adds a nice touch to it!

It wasn’t very cold on the day of our hike and the water was only partially frozen and that made for a really cool atmosphere. I’ve seen pictures of the waterfall in the summer and it’s actually much bigger than what we saw. The snow seems to cover a lot of it and it’s hard to know exactly where the water stops.

Return to Névache by the right bank of the Clarée river. 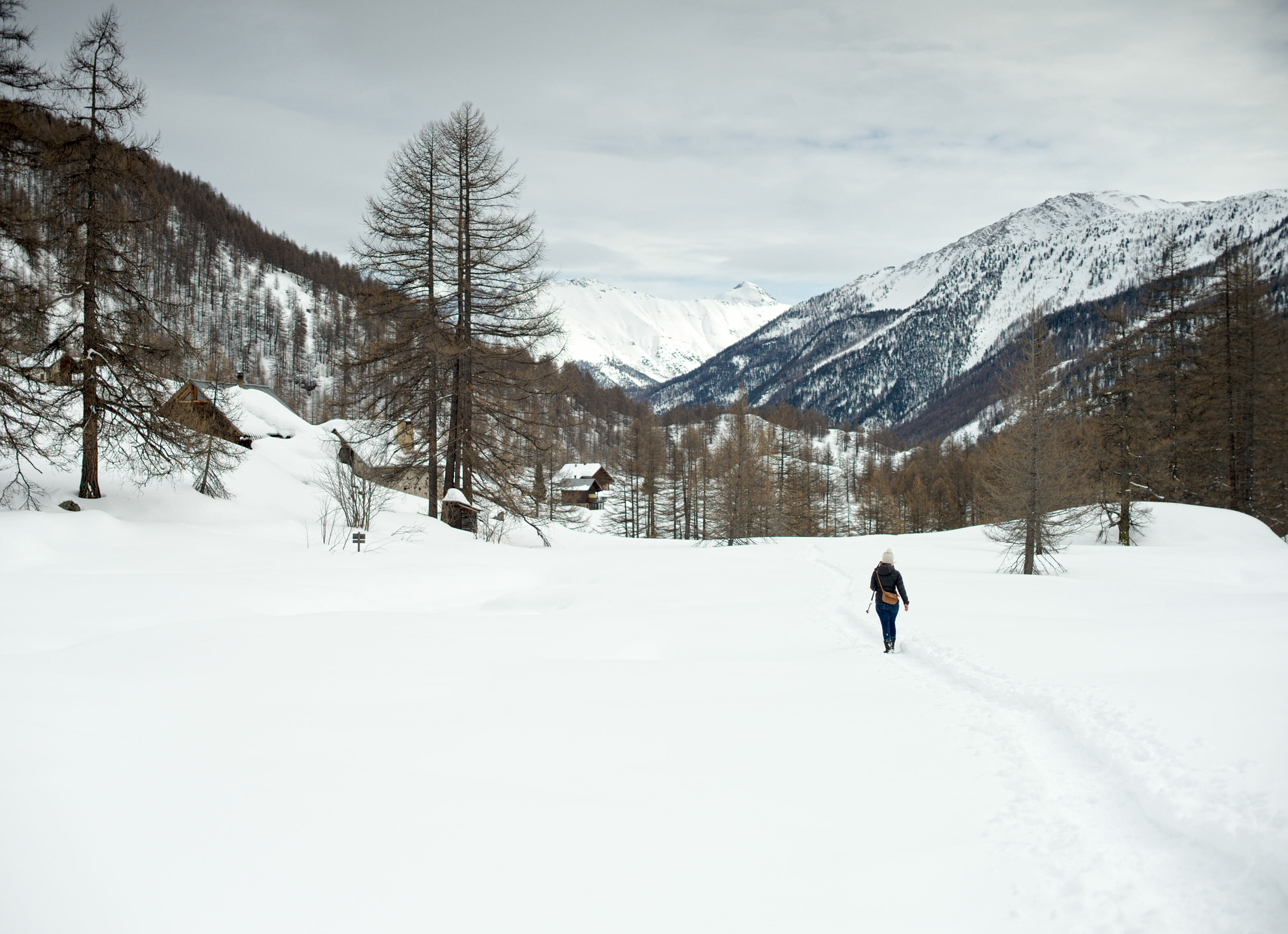 Compared to the outward journey, this path is much more “wild”. We can forget about the groomed trail and put on snowshoes to advance on a small path along the water. I personally preferred this path even if it’s clearly much more tiring to progress like this than when it’s all flat. 😉

For my part I did this section without snowshoes, but sincerely I don’t particularly recommend it. I was sinking in the snow a lot in places and I admit I had quite a hard time on certain parts. But unfortunately, even if I had snowshoes it was no longer possible for me to put them on. Don’t ask me how, but I managed to get a bone edema on my malleolus. At the beginning of the walk it hurt but it was bearable. After our break it was simply impossible for me to have the snowshoes that put pressure on my ankle on, it was too painful.

Careful: the return by the right bank of the Clarée can present an avalanche risk between HauteVille and the Pont du Rately (see the map below, there is a marker at the bridge). Be sure to inquire about current conditions and do not take unnecessary risks. If the conditions are not suitable, cross this bridge and go up to the little chapel and then return to Névache using the summer road for the last strech.

The walk begins and ends in the small hamlet of Ville-Haute in the commune of Névache. There is a car park just at the level of the tourist office (at the end of the road roughly 😉 ).

Map of our snowshoe hike:

That’s the end of this first article on the Briançon region. I promise we will come back very soon with other snowshoeing itineraries but also some good tips for downhill skiing in the area.

The other articles are live:

Briancon: our full guide to go skiing in the French Alps 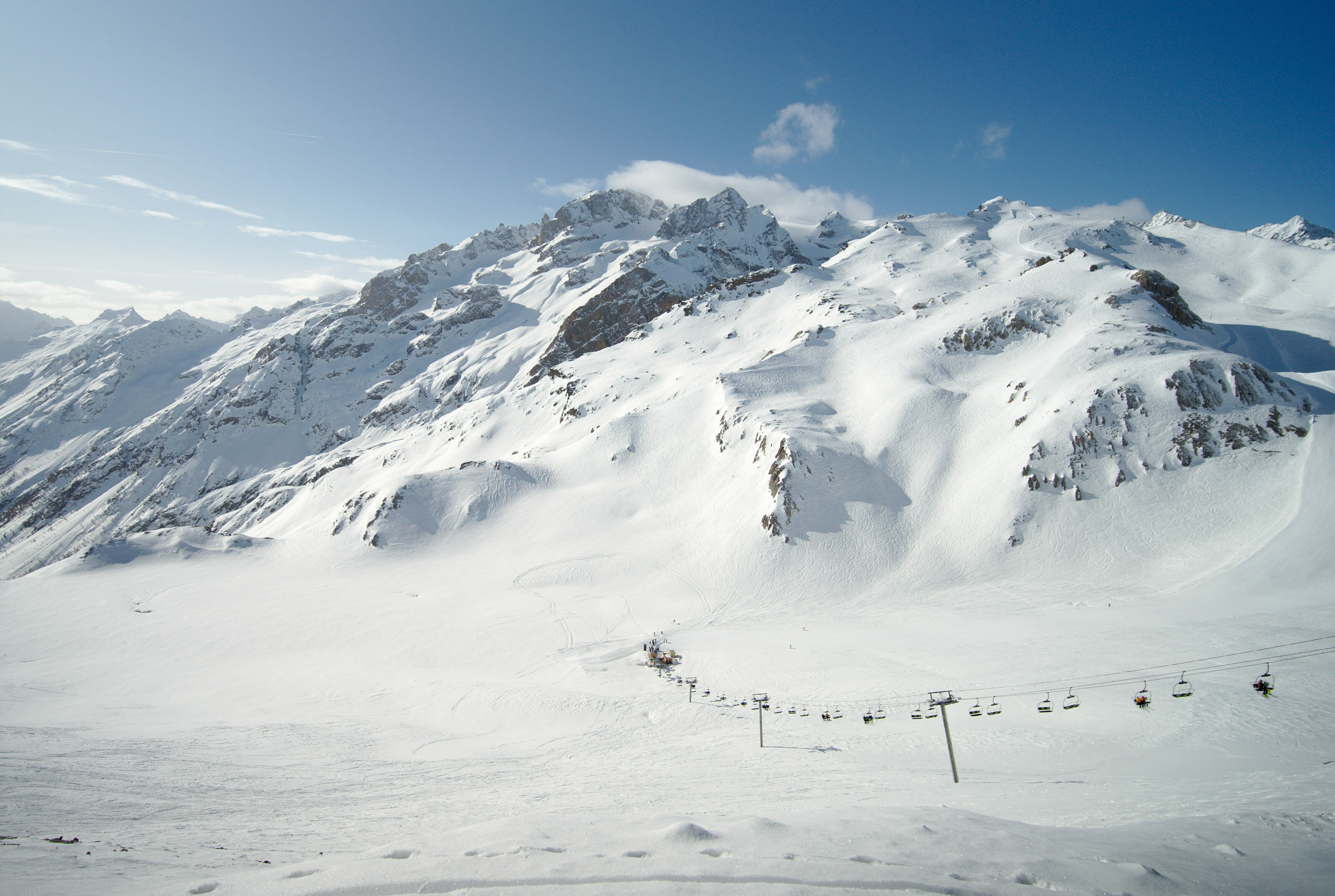 France in Winter: 3 snowshoe trails ideas around Briançon and... 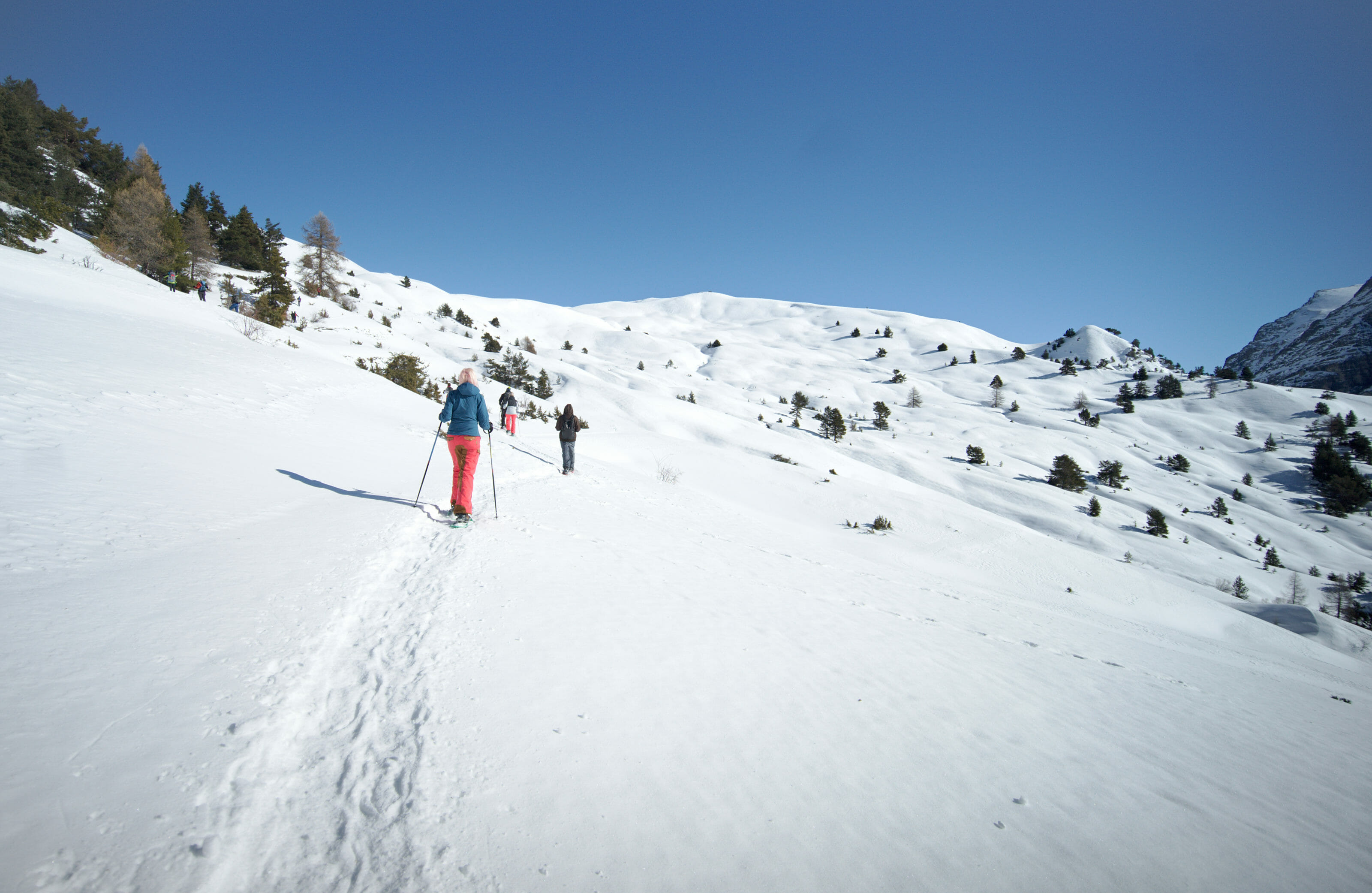 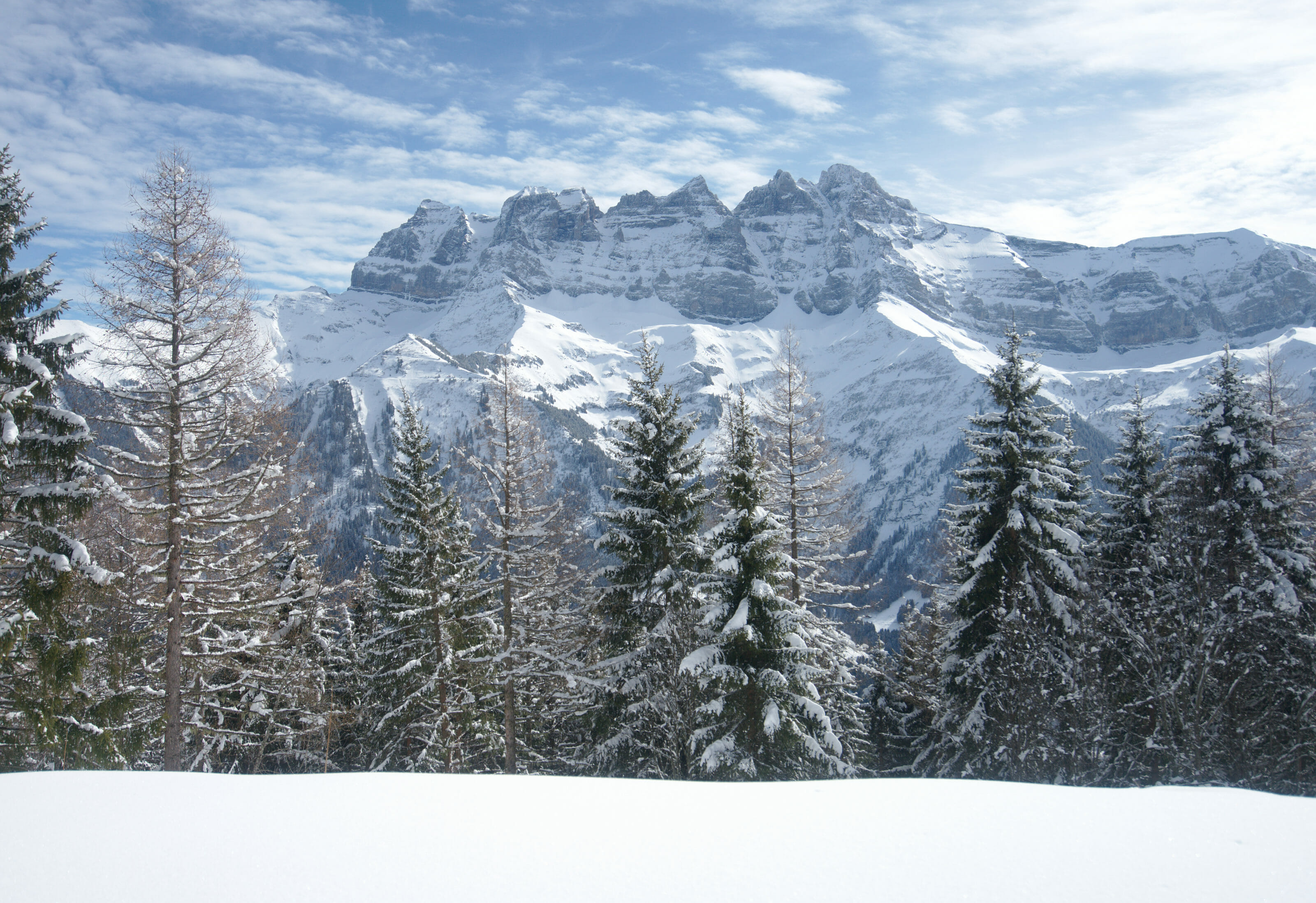