After a short stop in the sublime and colourful little town of Valparaiso, we set off towards the ultimate objective of our trip to South America: Patagonia! Our first stop was in the beautiful area of the Huerquehue National Park. 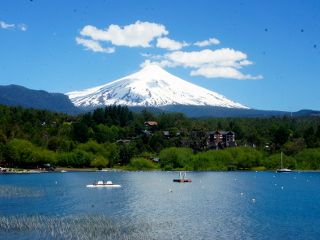 Because it’s no longer a scoop for anyone, we’ll get home eventually. And even if we still have a few surprises in store for you in Europe before our return to Switzerland, our passion for trekking and wide open spaces could not lead us anywhere else than Patagonia!
So it was after a nice 14-hours ride on a night bus that we arrived early in the morning in the beautiful little town of Pucon, which let’s be honest will have many surprises in store for us!

We didn’t know much about Pucon, we admit it, we just saw a picture of this small town nestled on the edge of a lake with the Villarrica volcano in the background.

When we arrived in Pucon we immediately had a little smile on our lips, we felt almost like in Switzerland! The small town of 22,000 inhabitants is very cute. Very clean, and the main street honestly reminded us more of Gstaadt or Zermatt than South America!

Well, then it’s true that the volcano adds a little something extra, because well, it’s not tomorrow the day that our national Matterhorn will start spitting lava!

The Villarica volcano is known to be one of the most active Chilean volcanoes with more than 65 eruptions in half a century! And it is for his beautiful eyes, or should I say his beautiful crater, that many travellers pass through the area!

Because yes, you can easily reach its summit in less than a few hours and take a look at the heart of the active volcano!

Why didn’t we go up to the Villarica volcano?

We decided against going up to the top…. 2 reasons for this: the first is the price: 40’000 Chilean pesos (55€) per person! So certainly it’s not a big deal if you consider that it’s to climb to the top of an active volcano with a guide. But for our backpacker budgets this was a bit too expensive.
Especially since we had already had the opportunity to climb other volcanoes, notably in Indonesia, Cotopaxi in Ecuador and Parinacota in Bolivia.

The second reason is the crowd! This activity is very much appreciated (we understand why). But as a result, nearly 250 people climb the slopes of the volcano every morning during this season!

But if you want to do so, know that you don’t need to book anything months in advance. There are many agencies that offer the tour in the city centre! Our advice would be to come to Pucon and book at the end of the day for the next day, having taken the time to check the weather forecast at the last minute!

The Villarica crossing, a least we tried… 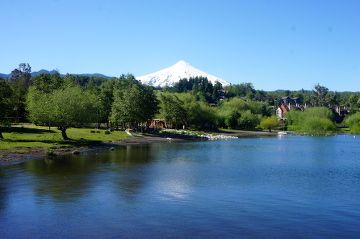 If we came to Pucon (initially) it was to do a 5-day trek that looked spectacular: the Villarica crossing!
5 days trekking, 84km, a path that leads between the Villarrica and Quetrupillan volcanoes with a plunging view of the Lanin volcano! The program looked sporty, but sublime! So it was with a lot of energy that we went to get detailed information from CONAF (the organization of Chilean national parks). When we arrived at the office we were greeted by a ranger. We explained our plan to him and he just laughed…

You guys are funny… But that’s not possible! At the moment there is still more than one meter of snow left on the trail… well…. the trail is rather non-existent, and you will be unable to advance in such a mass of snow! »

Big disappointment for us! This crossing is in fact impossible before mid-December (even mid-January in some years), thus, it was impossible for us to wait until then… But we still wanted to move our legs a little bit, so we started looking for an alternative! 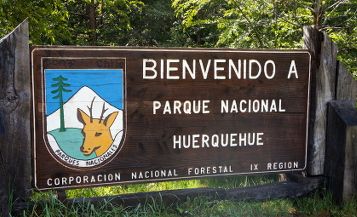 So it was impossible for us to cross Villarica, so we had to look for an alternative that is lower in altitude, and that’s how we came across the Huerquehue reserve.

Huerquehue Park is 125 square kilometres, with dozens of small lakes and lagoons, well-marked hiking trails and superb waterfalls, but it is best known as the home of the Araucarias. 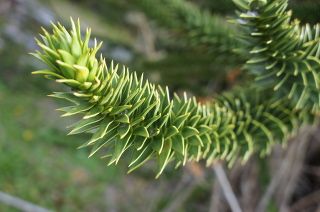 These trees made us laugh quite a lot! In our opinion, it looks a little like a fir tree mated with a palm tree and a cactus joined the party to add a final touch to it ! 😉

But more seriously, if you want to know about the more “scientific” details, head over to wikipedia.

Trekking in the Huerquehue Park

The park can be visited in 1 day from Pucon. It is possible to take the bus in the morning, make a loop in the park and then return to the park entrance to take the last evening bus that will take you to Pucon. 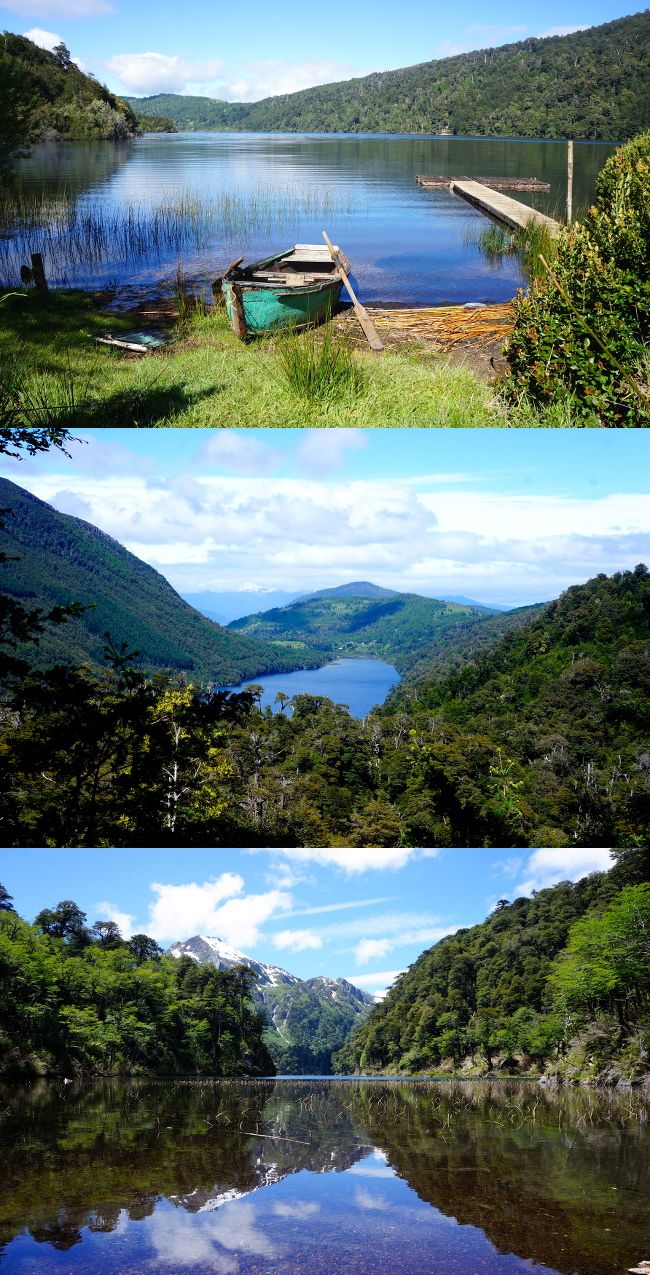 But as we absolutely wanted to do a trek over several days to get in shape for the rest of our trip in Patagonia, we decided to opt for the crossing of the park. 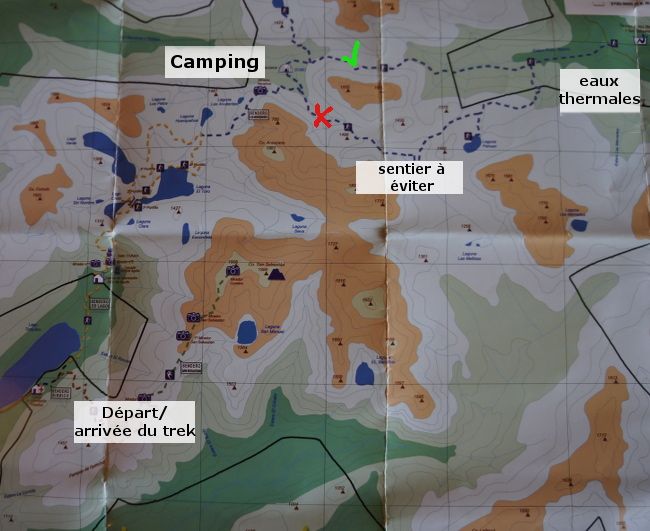 After spending the night in the park we had roughly 2 options…. Either we retraced our steps towards Lake Tinquilco or we continued towards the thermal baths of San Sebastian…

Hmmm rough choice…. A 12-degree lake or thermal waters? We let you guess which option we took! 😉

So that path was much less well marked and especially less maintained… we crossed rivers, we trampled in the mud, we got down into the bed of a river… In other words, it is covered with mud that we arrived at the thermal waters after only 3 hours of walking! 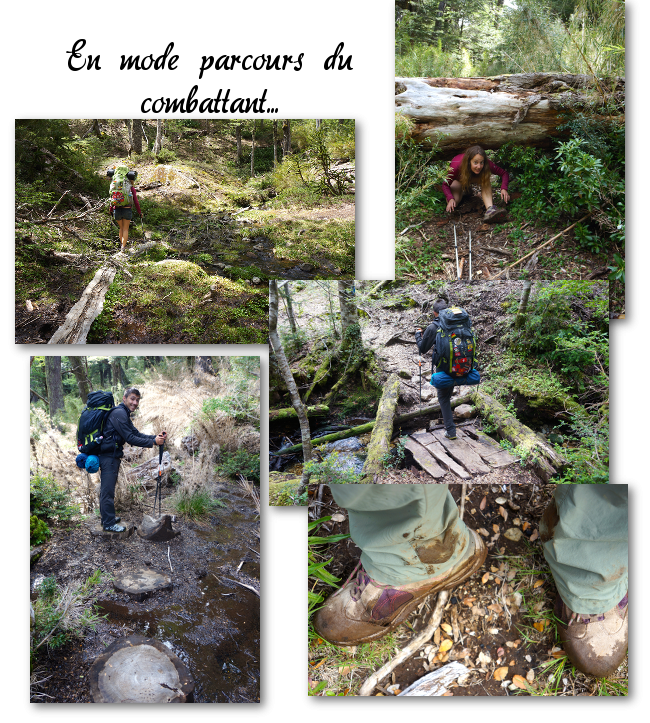 When arriving in heaven makes you change your plans

At that time we were simply thinking of taking advantage of the baths and then retrace our steps and spend a second night in the park. But that was before I saw the dream setting in which the thermal waters were located!
2 natural pools, one at 38 degrees the other at 49 degrees, a view of the valley and the top of the top the possibility to camp 2 meters away from the baths! 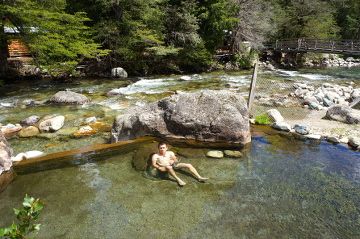 On the trek we met a Swiss German couple, an Israeli and a German with whom we got along really well.It did not take us long to decide we’d stay the day in this little paradise: relaxation, exciting discussions, aperitifs in the baths and a nice evening spent under the starry sky…

A return to Pucon “steeper” than expected….

The next day, however, we had to leave again. While the Swiss-German couple opted for a return to Lake Tinquilco by retracing their steps, we preferred to take a walk towards Reigolil to catch a bus back to Pucon. 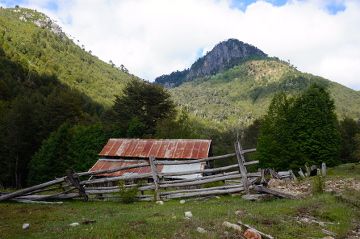 The deal was clear, according to our map, 20-25km separated us from Regolil, and according to our map (not topographic it goes without saying) the path had to follow a river, thus little elevation change… Easy Peasy you might think!
Yeah…. So we followed the river, but from far away! Sometimes we overlooked it a few hundred meters, sometimes we walked along it…. In other words, the 20km were VERY hard, it climbed a lot, but the trail was so beautiful that we forgot (almost) about the pain in our thighs!

To reach Regiolil from the thermal waters, follow the road for 4km and then turn right at the crossing. It’s climbing sharply, and no traffic on the horizon so don’t count on being able to hitchhike.
The bus stop is in Flor del Valle (about 20km after the crossing). Stop at the small bus shelter just past a bridge. The bus passes every day at 1pm. But be careful there is no other bus, so leave the spa in time. We left at 7am and arrived at 11:15am, but walked quite fast the whole time.
The bus costs 3000 pesos per person and the journey takes about 2h30

Note: I traced the hike to Reigolil but the bus stop was a little before (however impossible to find the spot on the topo map…. but you can’t miss the bus stop, it’s a small cabin with a schedule hanging after a bridge).

PS: The schedule is from 2014 and I couldn’t find an update. Make sure the bus still passes and schedule by asking the thermal baths managers before you start. 😉

That’s it, you know everything about our first escapade to Patagonia. It was a wonderful appetizer, and we can only recommend Huerquehue!

We will meet you in a few days around Puerto Varas, we have in mind a new trek that also combines hiking and thermal waters!
I mean… why not! 🙂

Note: This article contains affiliate links to partner sites. By using our links you do not pay anything more, but we’ll earn a small commission. Thanks for your support 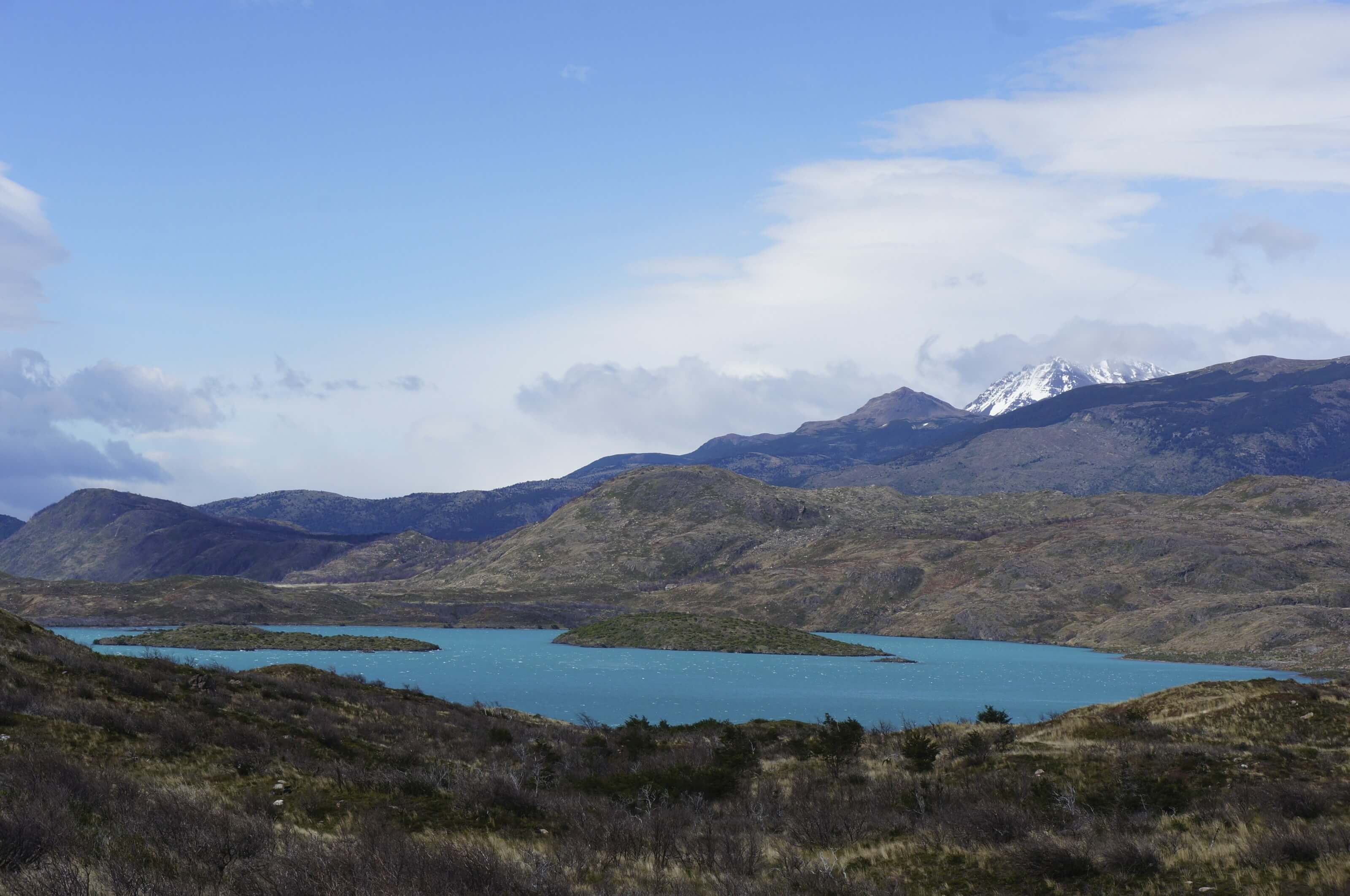 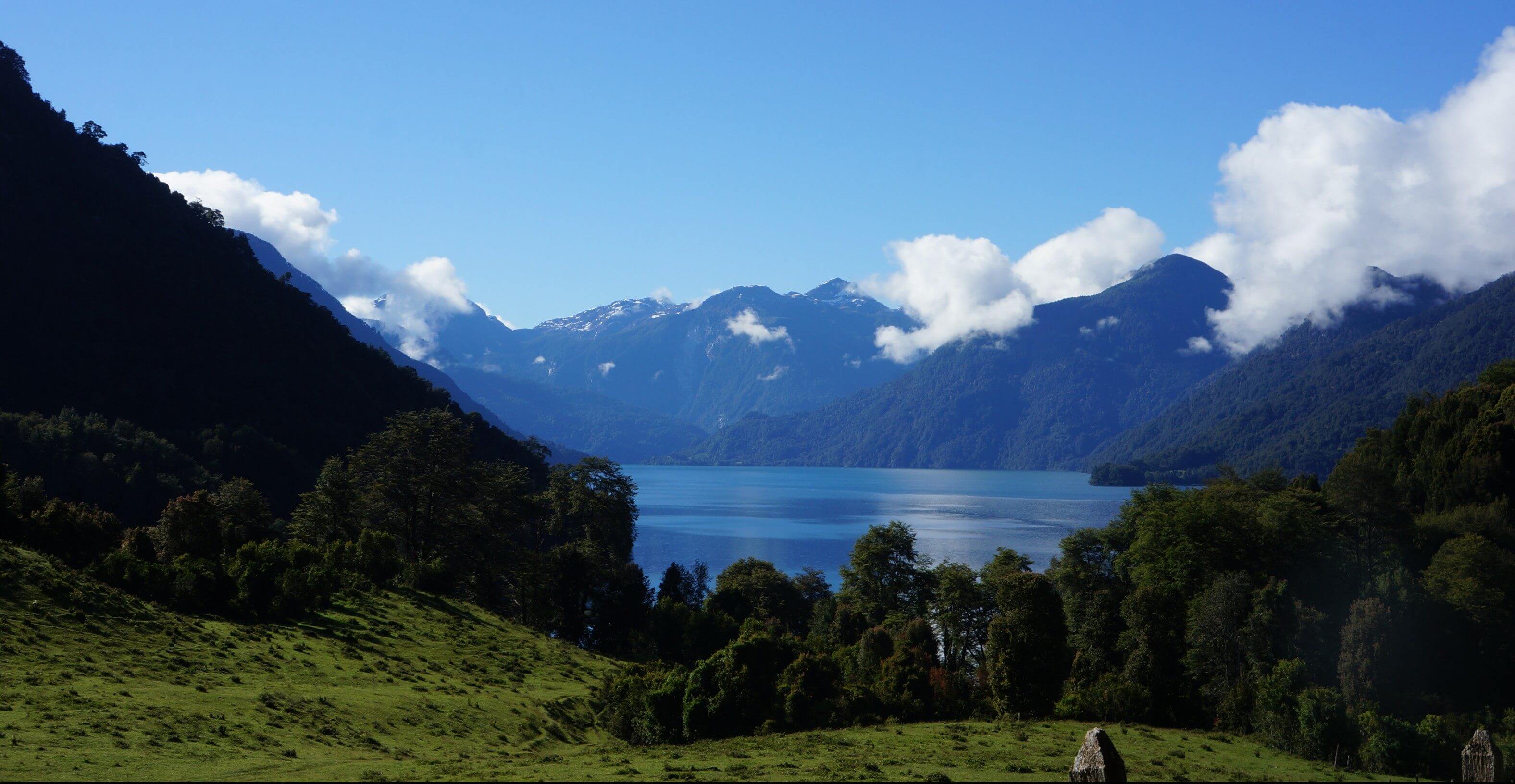 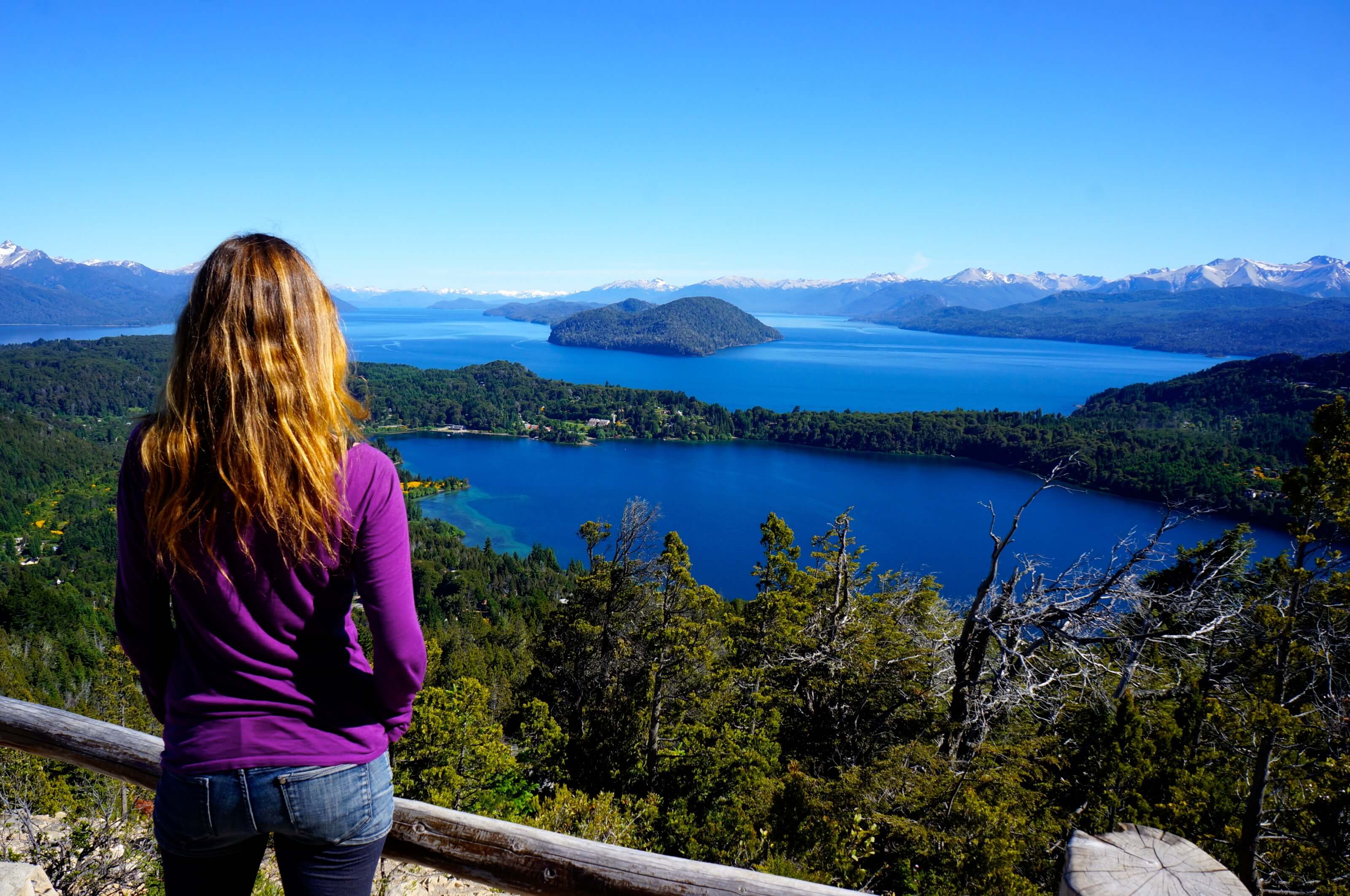 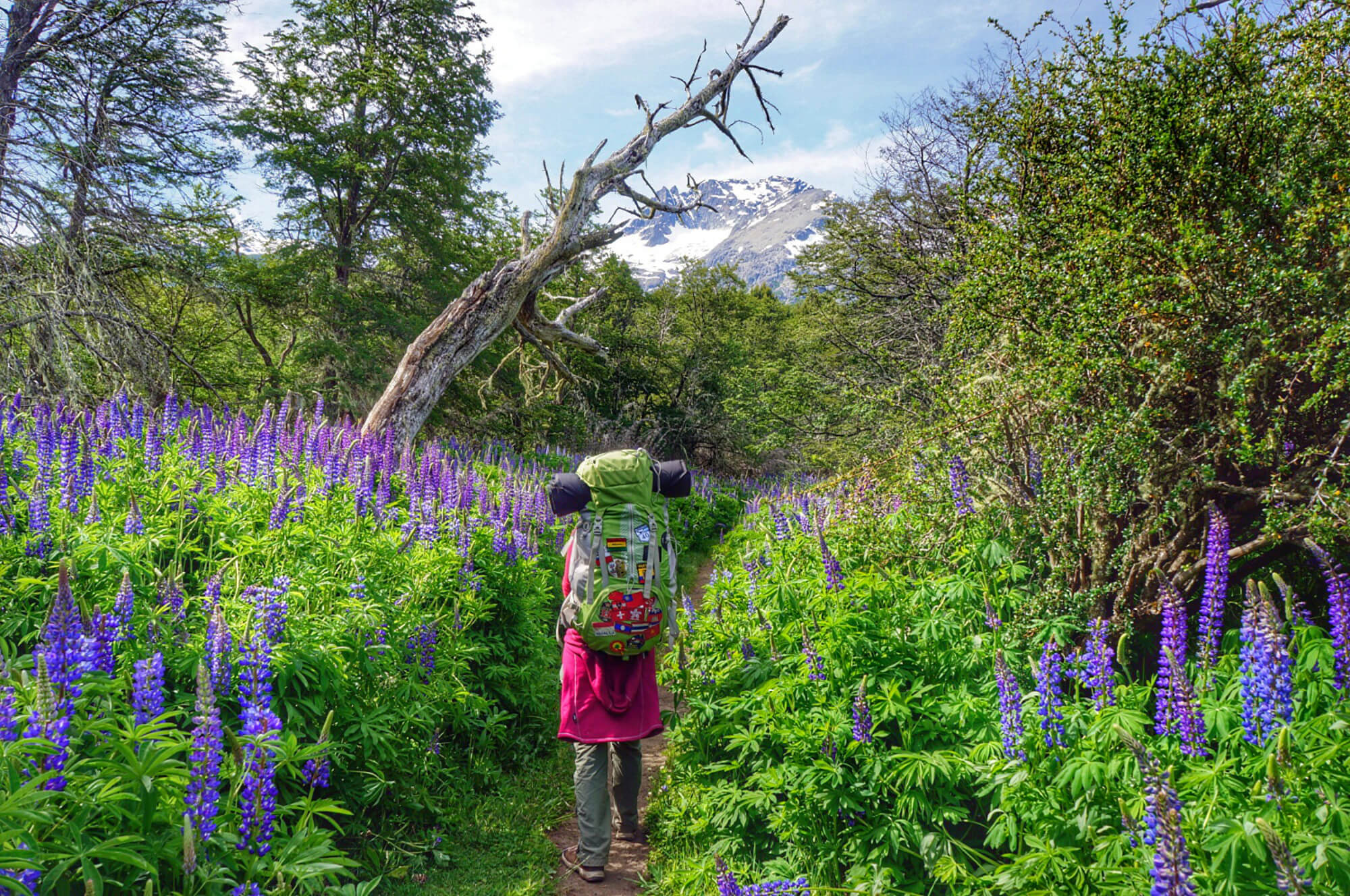