We must admit that as good little Swiss who are a bit clueless about France, we didn’t know much about Aveyron… We will even admit that the first time we heard the name Aveyron, we had to enter it in google map to be able to locate it on a French map 😉 #ShameOnUs. So when we were told that the big annual travel bloggers’ fair (understand by that the #WAT18 show) would take place in Aveyron, we were just really happy because we had everything to discover there. 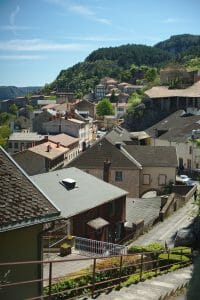 However, even if we did not know this department, we knew well (by name at least) a village in this region… a village mainly known for its cheese made from sheep’s milk and with a blue heart: I named Roquefort. If you know us a little already you’ll probably have noticed that, when there’s cheese, Fabienne and Benoit are never far away! So we decided to take a little more interest in this village and its cheese, which is a little bit of a symbol of the quality of French agriculture and gastronomy.

But to do things in our own way, we decided to add a little touch of hiking to the discovery and to offer you THE hiking day – the perfect terroir in Roquefort. Let’s go 😉

For this day outing, we advise you to start early in the morning (8-9am) with a nice hike following the ladders trail (sentier des échelles in french).

Why are you advised to start with a hike?

First, this will whet your appetite for the different Roquefort tastings the rest of the day 😉 but above all, this walk will allow you to discover the geological features that make the maturing of Roquefort possible.

Well yes, it should be known that the village of Roquefort-sur-Soulzon is built on a gigantic rockfall (which took place several million years ago) of the Causse du Combalou. It is in fact in these screes that natural cellars have been formed, ventilated by the famous fleurines, which give the cellars the ideal temperature and humidity for the maturation of Roquefort cheese. 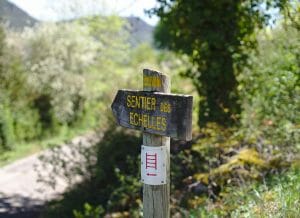 So, admit that it’s quite nice to go for a hike that passes over this scree and then climbs onto the Causse du Combalou and ends, as if by chance, just in front of the Roquefort Société cellars 😉 .

The hike starts just in front of the tourist office of the village of Roquefort-sur-Soulzon and is very well indicated all along by a small ladder. The trail first climbs towards the Causse du Combalou, this large limestone plateau typical of the Aveyron and overlooking the village. The path crosses the scree at the foot of the cliff and then continues up to the tip of Combalou thanks to a small staircase built at the level of the perforated rock.

Once at the top, we continue to cross the whole Combalou plateau with very nice views of the village of Roquefort from the top of the cliffs. On the way, we pass in front of a jasse (old sheepfold) because at the time, the Combalou plateau was a place of pasture for the sheep herd. Moreover the itinerary is called the ladder path because there was previously a shortcut with 2 ladders along the cliff to go down faster to the village.

Once at the other end of the plateau the path gently descends towards the village. We walk along the cliffs to reach a platform with an orientation table and a very beautiful view of the village of Roquefort. After the stairs, turn right to get to the parking lot of the Roquefort Société Caves that you will be able to visit. 😉

After this beautiful hike, what better way to discover how the famous cheese is made and matured than by visiting the caves of Roquefort Société.

So to begin with, it should be noted that there are in fact 7 Roquefort manufacturers all located in the village:

As far as we are concerned, we will visit the Roquefort Société caves. To do this, it’s easy, just go to the reception desk during opening hours and wait for a guide.

As we didn’t know much about how to make this cheese, we loved this guided tour which lasted about 1 hour. Here is what we learned during our visit

The legend of Roquefort cheese 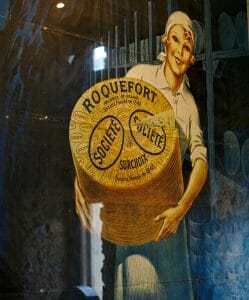 A long time ago, a shepherd who preferred to run for women rather than keep his animals would have forgotten in a cave his meal made of bread and sheep’s cheese. When he came back a few months later, he would have found his bread covered with moulds that would have transformed the cheese into Roquefort.

Roquefort: a historical and protected cheese

Roquefort is not really a new product. 😉 Even in the Middle Ages, the great kings of France particularly appreciated marbled cheeses. The Roquefort caves were even recognised and protected by being granted the exclusive right to ripen Roquefort at the time. Nowadays, Roquefort is recognized as a Protected Designation of Origin (PDO), which means that a cheese can only be called Roquefort if it complies with certain very specific rules:

The rockslide on which we passed during the hike gives the village of Roquefort exceptional conditions necessary for the maturing and development of mould in the cheese. The natural caves that have formed in the scree are maintained at a temperature of about 10 degrees and very high humidity by the fleurines, natural cracks in the rocks that ventilate the fresh air caves.

Penicillium roqueforti is the fungus (therefore the mould formed on the bread in the legend ;)) which is mixed with sheep’s milk and which will allow the growth of the mould during the maturing period in caves. It is a bit like the secret ingredient of each manufacturer and each one of these mushrooms will give the aromas specific to the Roqueforts of each brand.

The Sociétés caves are impressive.

Let’s face it, the Société caves are damn impressive. During the visit, we passed through one of these empty natural caves to get a better idea of the dimensions. We were also able to see the fleurines up close and feel the fresh breath they bring inside the caves. And finally, we had the chance to see a cave filled with cheese in the process of maturing. There’s no need to say, seeing so many cheeses lined up next to each other, it makes something and puts in your mouth for tasting (and it stings a little bit the nostrils too as you say)! 😉

The long-awaited moment of the Roquefort tasting

A visit to Roquefort caves without tasting… unthinkable no? Fortunately, the visit ends at the Société store where a small tasting of the 3 different types of Roquefort of the Société brand await us (1863, the Baragnaudes and the Templar cave). We taste the different cheeses with gingerbread and the mixture of flavours is rather nice. As far as I’m concerned, I liked the 1863 better, which is very balanced (strong and creamy) while Fabienne preferred the other two… As you can see… tastes and colors 🙂 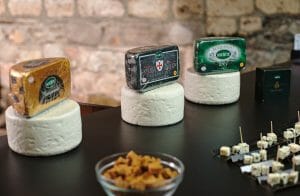 The Société caves are open to visitors all year round during the opening hours indicated here. The price of the visit is 6€ per person.

Visit to Alice’s farm to discover the Lacaune sheep (+ tasting) 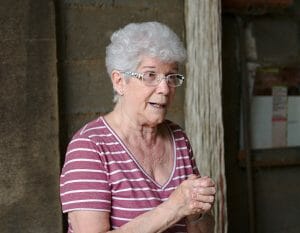 Ahhhhh Alice… we were really looking forward to meeting her because our guide of the Société caves as well as the master refiner himself had already praised us for the character. She was described as an endearing and passionate sheep breeder… a true ambassador for Roquefort cheese! So let’s tell you right away… we weren’t disappointed and Alice remains for us, the best example of the incredible welcome from Aveyron: a colourful, generous and passionate person!

Alice’s farm is located in Hermilix (address in the useful info section below), a half an hour’s drive from Roquefort-sur-Soulzon and we really encourage you have a look at her place as well. Not only will you be welcomed in a magnificent Caussenard setting, but you will also have the opportunity to discover a sheep farm whose milk is used exclusively for Roquefort cheese. Because even if maturing in the cave is a particularity of Roquefort cheese, it should not be forgotten that it is exclusively made from raw Lacaune sheep’s milk. 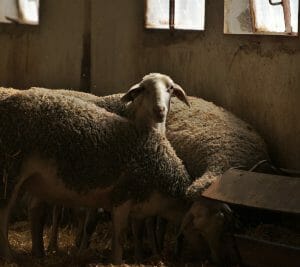 In short, it means that Alice’s sheep are milked twice a day (from December to August) and that every day, the truck from Roquefort Société comes to collect the milk. Because in order to be able to make Roquefort, the milk used must come from a milking of less than 48 hours (hence the name raw milk cheese).

If you visit Alice’s house, you can also ask her all the questions you have about this typical sheep breed of the region…. When we passed, Alice’s 500 sheep were still grazing outside. But maybe you’ll even get a chance to see a milking… who knows 😉

And if you still need to be convinced to stop by Alice’s house, you should also know that every visit to the farm ends with a moment of relaxation and tasting in a beautiful vaulted room by the fire. Alice kindly introduced us to the aromas of the different Roqueforts (we don’t tell you any more 😉 ) and also prepared some homemade sweet specialities made with sheep’s milk such as the famous Flauna (a cake made with sheep’s milk flavoured with orange blossom). So just to eat a piece of Flauna made by Alice, the little detour to the farm is already worth it, I tell you. A pure delight!

As you will have understood, we loved our visit to the farm to discover the other side of Roquefort cheese and we strongly recommend that you visit Alice’s house. 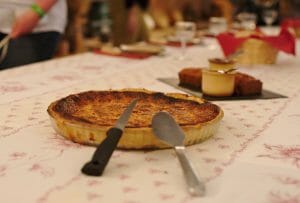 To visit Alice’s farm is very easy. All you have to do is call her to book and choose if you want a discovery (5.5€) or passion (8.5€) package… But if you want our opinion, choose the passion formula to taste Alice’s flawless flauna 😉

All the useful information (address, tel. no., price) to organise a visit to the farm can be found on this page.

Where to stay in Roquefort

There is no shortage of housing options in the area! As a personal choice, we clearly advise you to choose a small establishment in a nearby village and not in the city. You will find below a map of the accommodations in the region (hotels, bed and breakfast and apartment). Feel free to move the map around and use the price/type of accommodation filters to refine your search.

So, I think that if you follow our program to the letter, you will have spent a great time and will have had a great insight into the terroir of the Roquefort region. On the other hand, we must admit that the 6-7 kms of the morning walk was by far not enough to compensate for all the pieces of Roquefort or flauna that we ate during the rest of the day;) . But anyway, it’s not a big deal because Alice told us that

A little Roquefort every day is excellent for your health

P.S. We visited the Roquefort Société caves and Alice’s farm as part of the 2018 travel bloggers’ fair. Obviously, everything you read in this article reflects our sincere opinion of these activities. 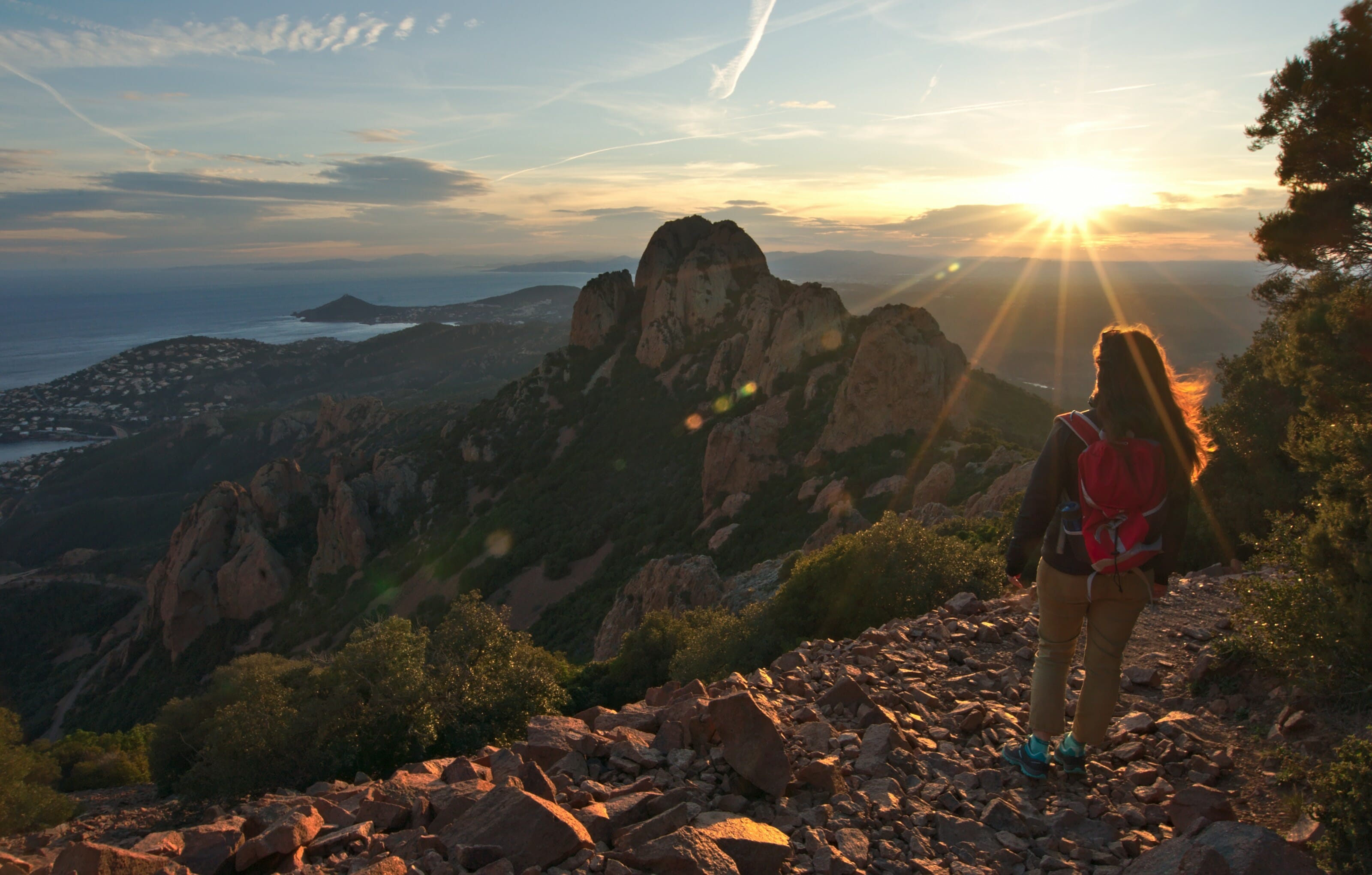 Castellar: a beautiful hike in the south of France 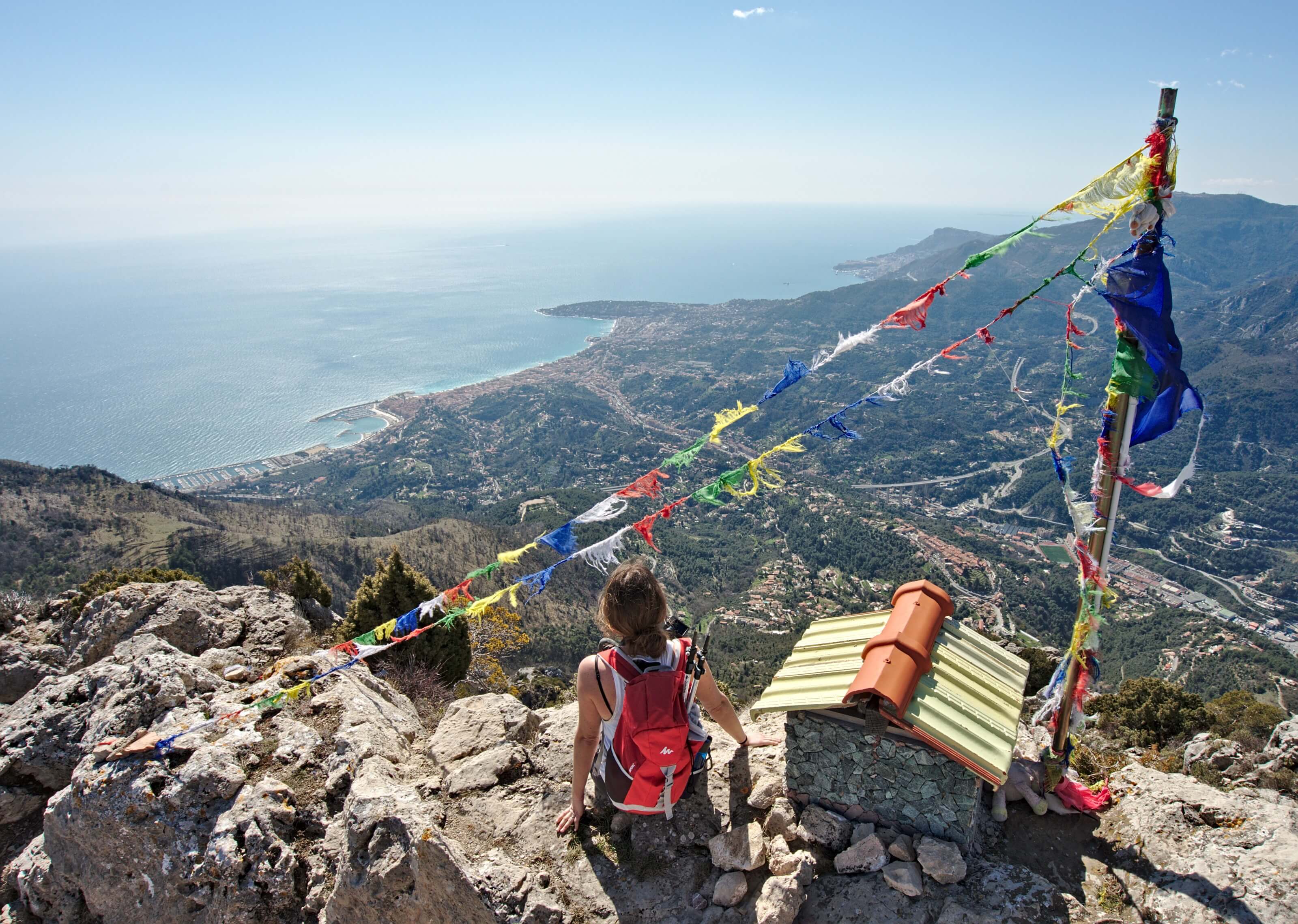 Hiking the Gorges du Verdon – our last days on the trail (Part... 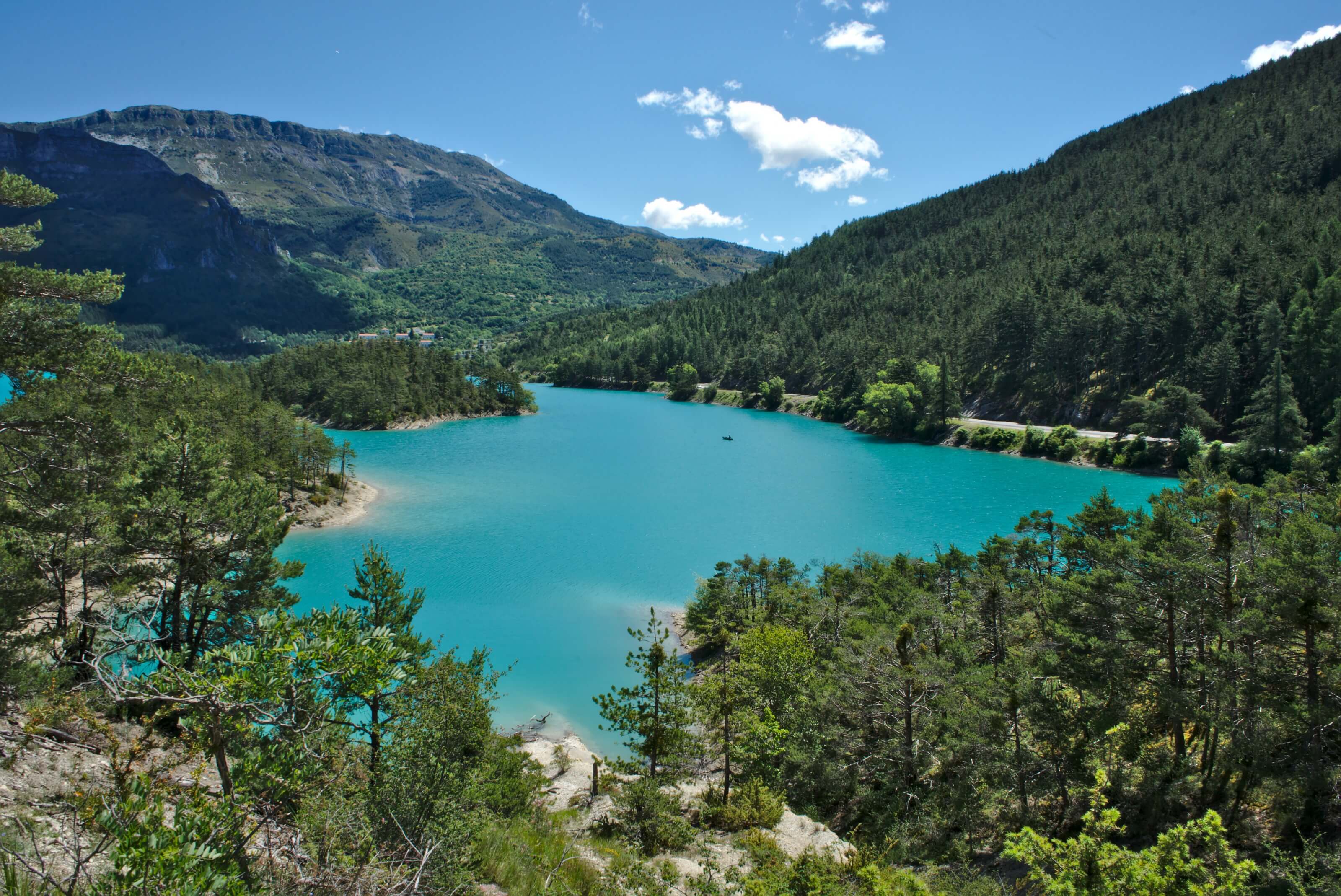 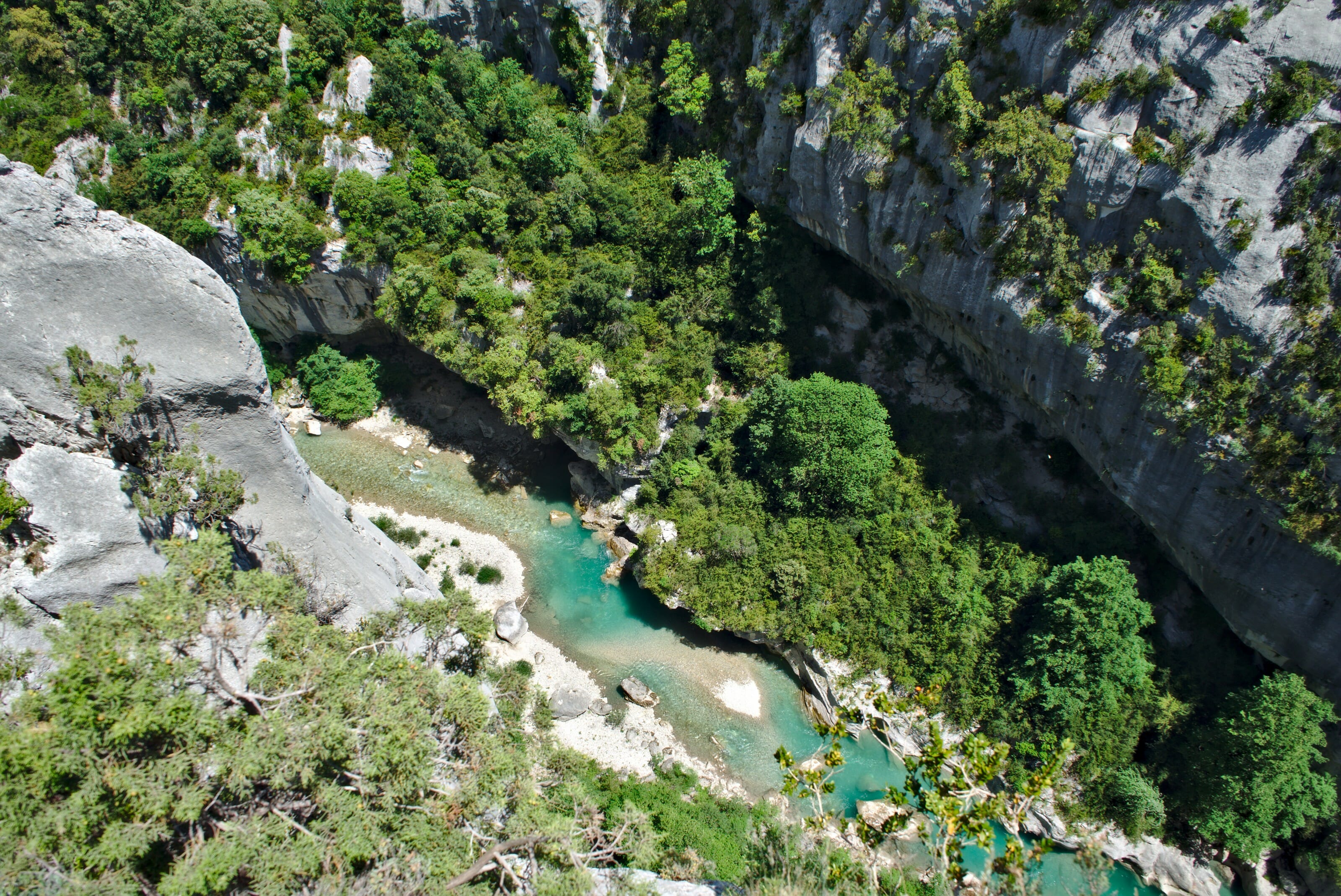 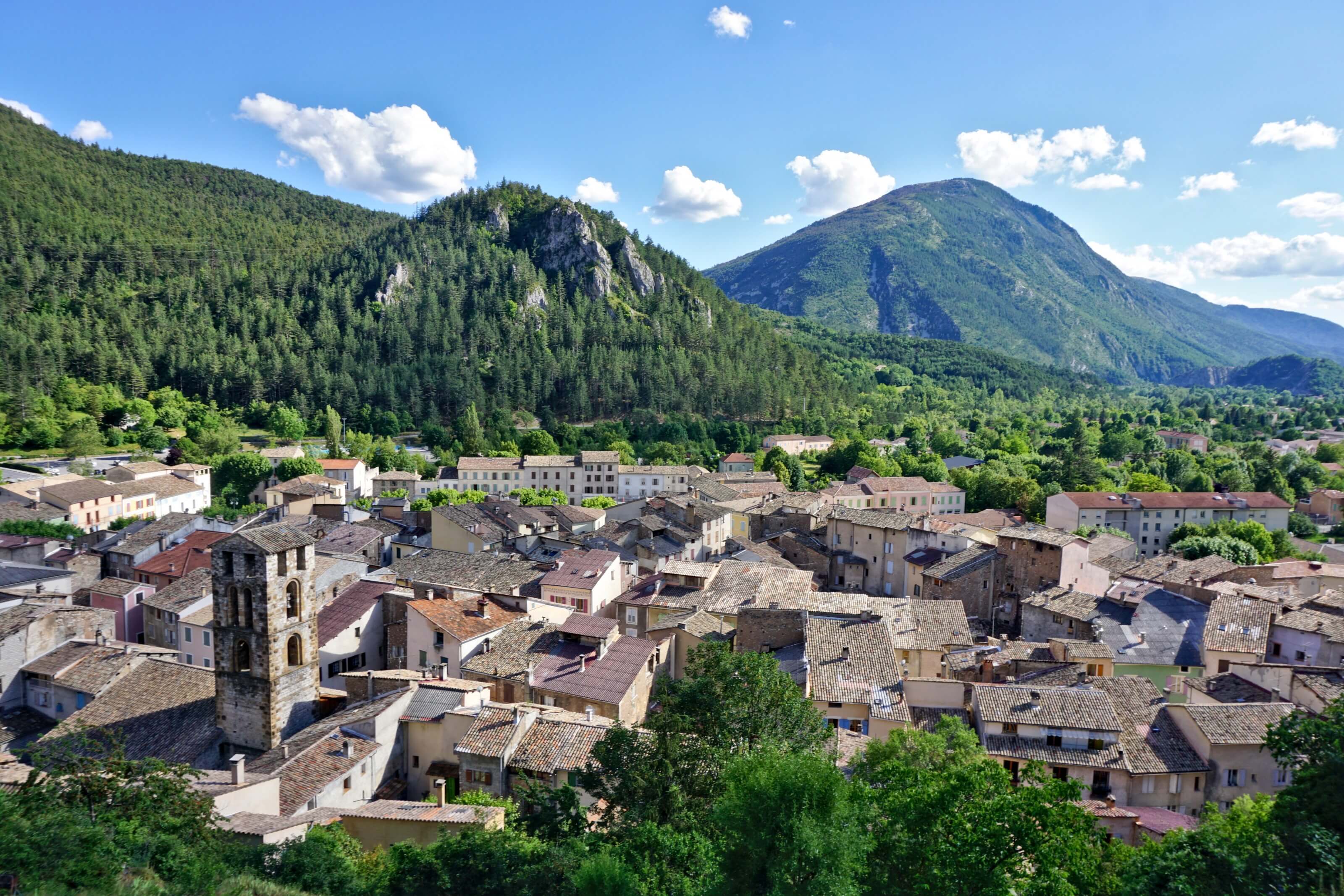