If I had to mention two mountains that are particularly close to my heart, it would be the Dents du Midi and Dent de Morcles in the lower Valais in Switzerland. 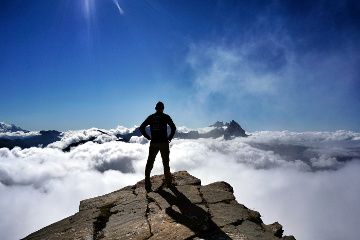 The reason is very simple, it’s the peaks that dominate the region where I spent all my youth (it doesn’t make me feel any younger, I spent more than 25 years of my life in the area)

When I see them in the distance from the train, I immediately have this feeling of being at home. So you will understand that after being an expatriate for 2 years in Vienna and travelling 18 months around the world, I wanted to climb back to their summit to admire the view from above.
So, I organized a trip with some motivated friends for a hike on a Sunday. We got up early in the morning with the objective of reaching the top of the Dent de Morcles for the aperitif. ;).

Where is the Dent de Morcles, what is it?

The dent de Morcles is unique in that it is located on the border between the Valais and the canton of Vaud. It is just not 3000m (2969m to be exact) but has nothing to envy its neighbours in terms of view because it is rather isolated and dominates the whole Rhône plain.

As you will see in the pictures below, the view from the top is absolutely spectacular. In good weather, you can admire the Dents du Midi, the massif du Combin but also the Dent blanche, the Matterhorn (the toblerone mountain), the Mont Blanc and even the Eiger! It’s a real perfect 360 degrees view :). 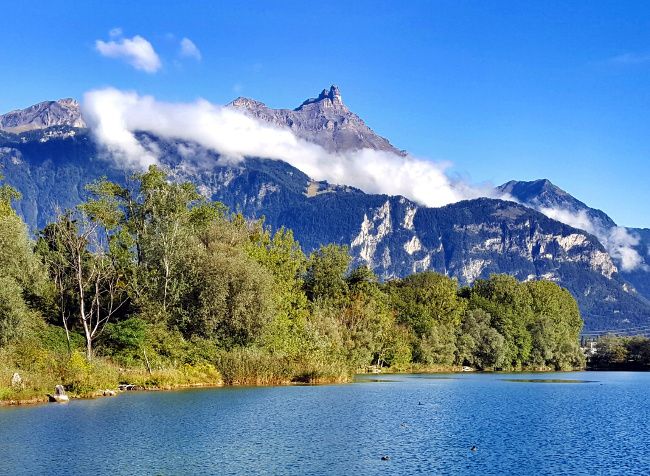 Route to get to the dent de Morcles

There are several possibilities to reach the top of the Dent de Morcles. 2 possibilities on each side in fact. Take a look at the map below, everything is very well explained:

You can reach the Martinaux car park by leaving the motorway at St-Maurice and following the road towards Morcles. The hiking trail goes to the left and it takes about 4 hours to reach the top of the Dent de Morcles.

Exit the highway at St-Maurice, follow Evionnaz and go to the village of Collonge to then climb up to Au d’Arbignon. From there, it takes 3h30 – 4h to reach the summit.

Exit the motorway at Martigny-Fully, continue to the village of Fully and then go up towards Chibo. Then it will be necessary to continue until the Erie car park. Be careful though, the road is very steep and unpaved after Chiboz. It takes about 6 hours to walk to the top from there. 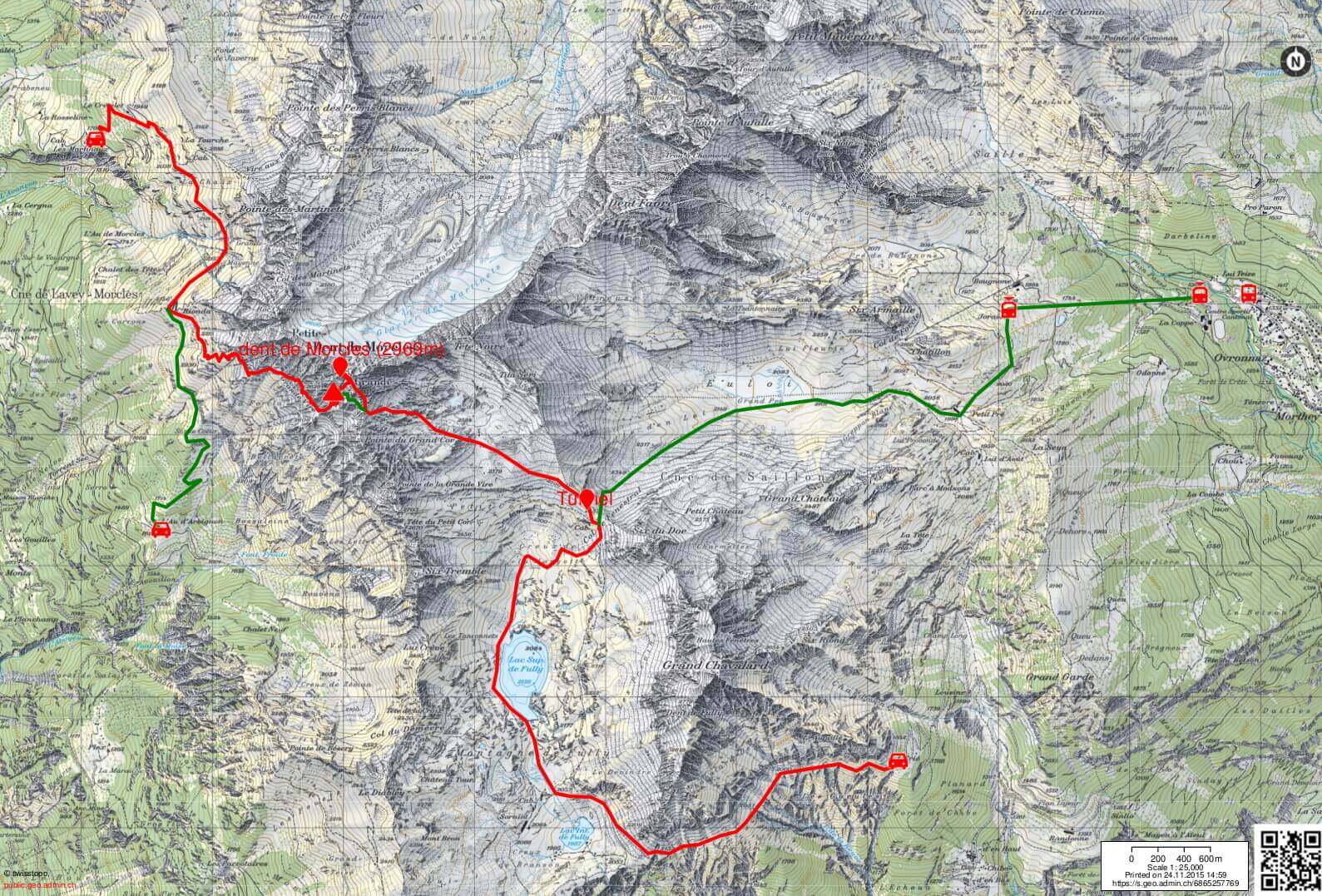 If you don’t have a car, it’s easy to see, all you have left is the possibility of Ovronnaz, which is the only place accessible by public transport.

As far as we were concerned, we were lucky to have my father at our disposal who agreed to take us to one place and then pick us up at the end of the day at another. So we didn’t even have to make a loop. We therefore chose to start on the Erie side and go down on the Lake Geneva side to the Martinaux.

I’m not going to lie, if you’ve never driven so much on mountains roads, then the road to Erie is not for you :). It is very steep, narrow and is no longer paved after Chibo. Well, my father is used to it, but it’s not a road designed for a small city car ahah.

From the Erie car park, we start climbing towards Lake Fully in the fog. But we remain confident for the rest of the day because from the plain, the weather seemed pretty good on top. The path climbs quietly. Ideal to warm up a bit before starting the serious business. 🙂
Arrived at the height of Lake Fully, we pass over the mist and the landscape that reveals itself in front of us is just amazing! judge for yourself 😉 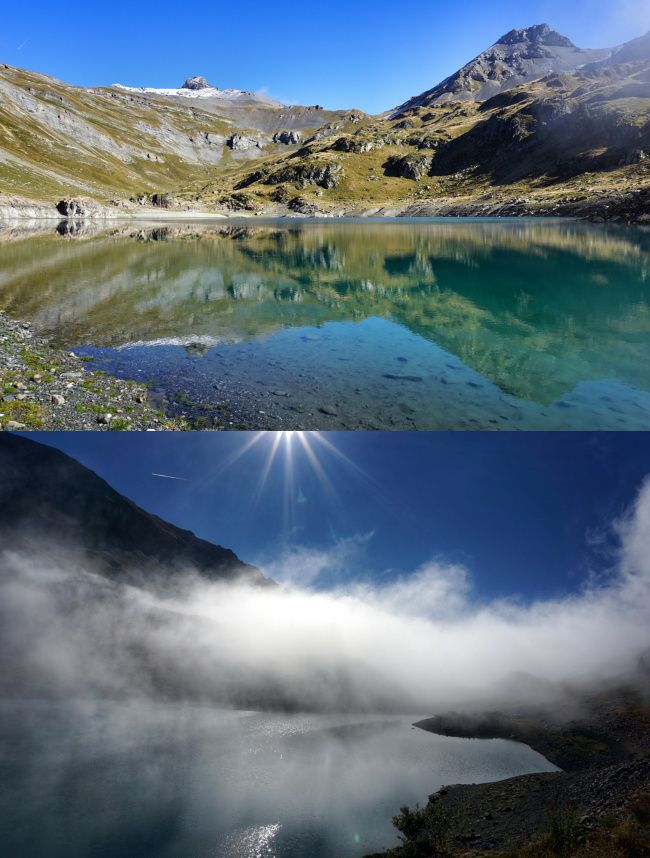 After going along the lake by the left bank and enjoying the view, we start again because the fog starts to rise and come back to our level.

After a low slope part, it starts to climb steeply in a scree block until we reach the Fenestral hut. But the path is well marked and does not represent a real difficulty. (And on a sunny day, you have the hut in sight).

But it is also where you will arrive if you climb from the village of Ovronnaz via the Fenestral pass (green path on the map). We take a short break to eat something before we start to get serious. 🙂 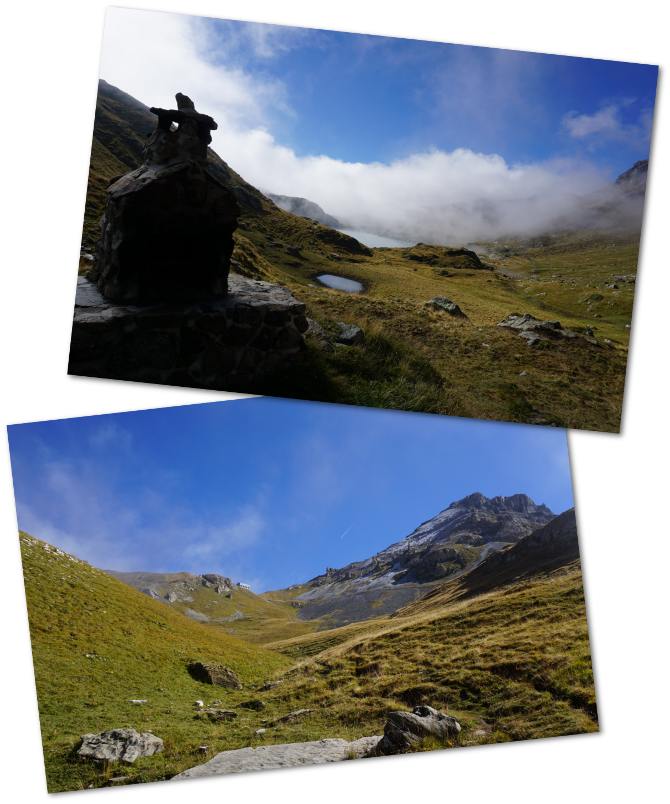 Ascent to the summit for the aperitif

From the hut, the path is less well marked and sometimes difficult to follow. In bad weather conditions, I guess it can be a little difficult to find your way around (Frankly, in bad weather, just avoid going up to the dents de Morcles). But here and there, on pebbles, there are always white, blue signs indicating that we are on an alpine trail.

And in our case, the weather was fine from Fenestral’s hut… As a result, we had the summit in our sights.

A little above the hut, we pass by a tunnel (don’t ask me who dug a tunnel there ahah). I just advise you to cross the tunnel to admire the view on the other side. We can see very well the path that arrives at the Fenestral pass as well as the Six du Doe (the name of the mountain 🙂 ). 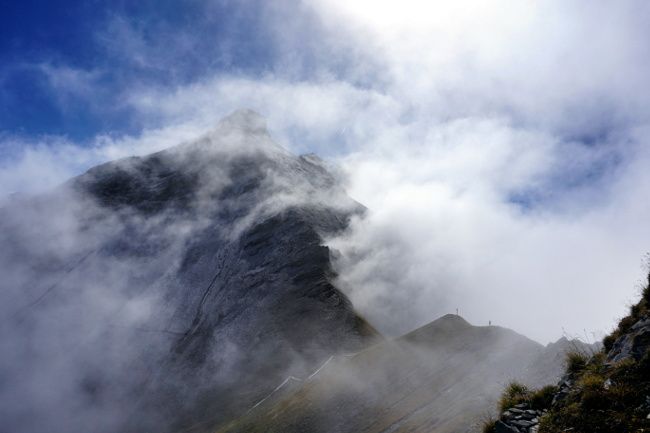 Then we continue towards the summit. The landscapes become completely rocky, you have a bit of a feeling of being on the moon sometimes.

Fortunately, the weather is very clear and we already have a magnificent view of the Combin massif from there.

I prefer to prevent, for the average hiker, the path is then not necessarily an easy one. We had to help ourselves several times with our hands to get through. But well, nothing insurmountable either and no equipment is necessary. Anyone can do it! (I don’t want to discourage anyone). 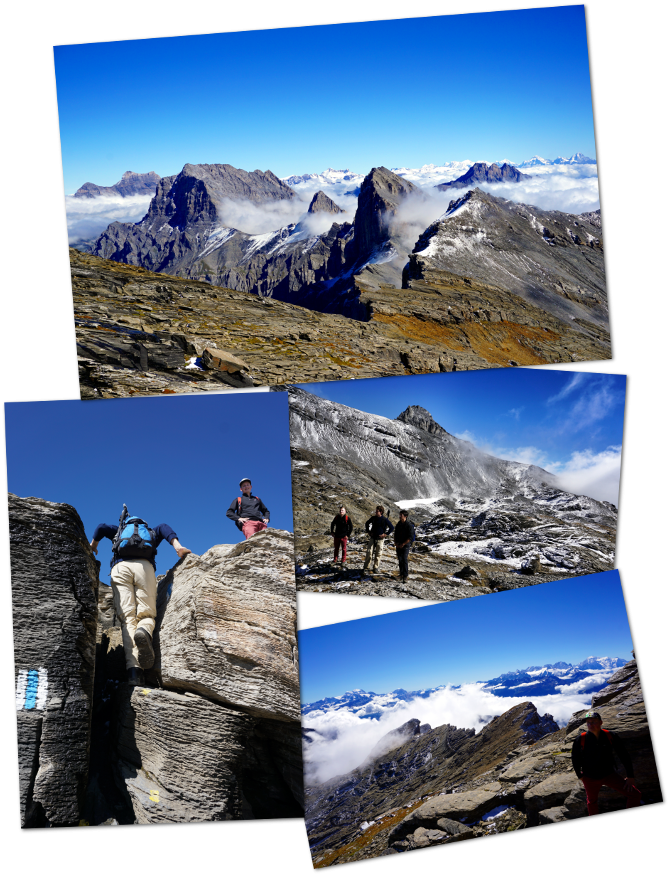 After this slightly more difficult passage, we continue along the road until we reach the top of the Dent de Morcles where we are rewarded with an absolutely spectacular view.

Honestly, it’s worth the detour, isn’t it?

And as I told you earlier, the goal was to reach the summit by the time of the aperitif! So we open a bottle that we will share with a small group of other hikers who arrived shortly after us. We also take advantage of this incredible spot to have a picnic and take a lot of souvenir photos. We were in heaven I tell you:).

Descent through the Red Nant corridor to Les Martinaux

After having the view for a good hour, we set off again to go back down towards the Martinaux. We first retrace our steps a little bit until we enter the corridor of the Red Nant on our right.

So, a few small details about the Red Nant corridor. Whether you do it on the way up or down, this is the most difficult part of this hike. The path is well marked all along but is only possible to take it if there is absolutely no snow (i.e. from August to October depending on the year). The slope is very steep and impressive so if you are afraid of heights: do not go through this corridor!

Otherwise, it is better to be aware of any small stone falls. Especially if you’re not alone in the corridor. But once again, this passage is a bit more technical but it’s doable. No equipment is required and you just have to lay your hands down 2-3 times. 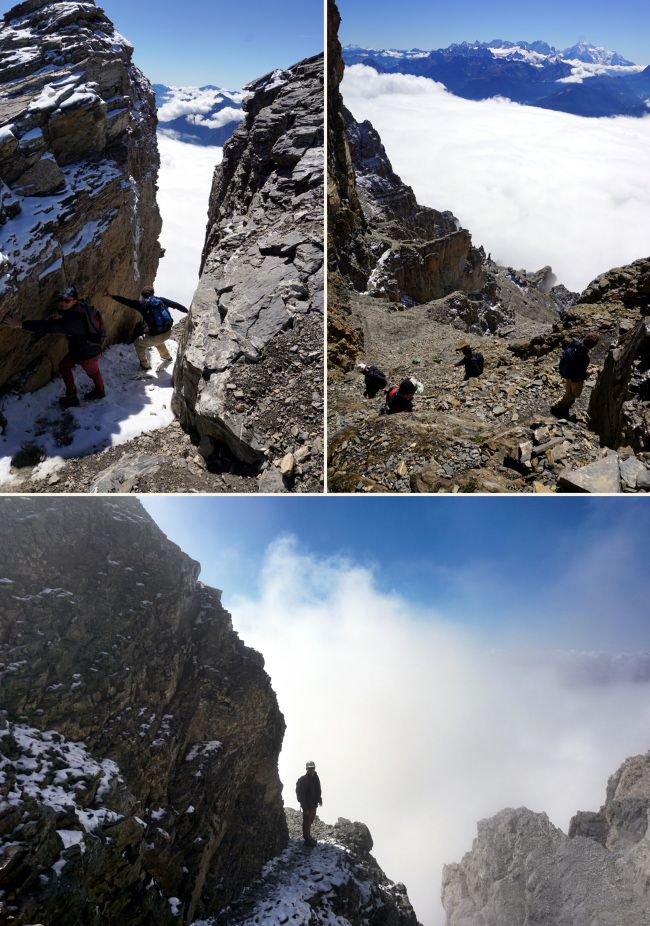 At the end of the corridor, we take another break on a promontory with a spectacular view of the dents du midi just opposite. At that time, we are still just above the mist that now covers part of the Rhône plain. We then pass in front of a military shelter carved into the rock before diving into the mist until we reach Rionda. 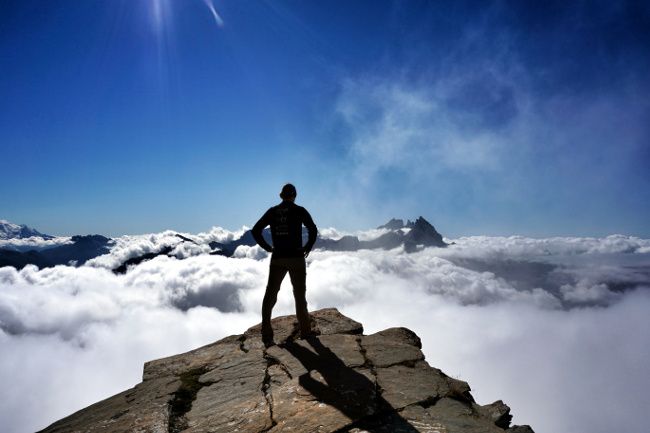 From there, you can go down on your left towards Au d’Arbignon or continue on the road towards the Tourche hut. By following the road, you will automatically arrive at Les Martinaux. But know that there is a small path on your left that will save you some time by cutting the laces. And if you feel like it, a contour lower than the parking lot, there is a small refreshment bar that will serve you a well-deserved beer:)

So here we are, I hope I would have made you want to discover a little more about this mountainous part of Switzerland. The view from the top of the Dent de Morcles is just breathtaking and I can’t encourage you enough to discover it for yourself! And if you’re a little afraid of the Red Nant corridor, just go back and forth from Ovronnaz. It’s really nice too. 🙂